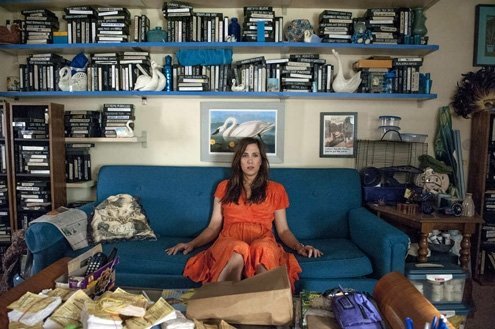 Kristen Wiig as Alice Klieg in "Welcome to Me": When madness gets personal.
A

lice Klieg (Kristen Wiig) is a former veterinary nurse with borderline personality disorder who lives in a cloistered Palm Springs, California apartment and spends most of her days absorbing positive reinforcement from a 1990s-era Oprah Winfrey episode she’s all but memorized. Having decided to abandon her medication despite her shrink’s orders — she prefers strip cheese to anti-psychotics — Alice finds herself cheerfully tumbling down a narcissistic chute she mistakes for positive thinking. That’s when she wins the California lottery to the tune of $86 million. This, to her, is a seal of approval.

She fires psychiatrist (Tim Robbins), moves to a room on a local reservation casino, and pays millions to a tidbit local TV station run by two brothers to stage a one-woman reality show called “Welcome to Me,” an platform for idiosyncratic exhibitionism in which she seeks to emulate her beloved Oprah (“I was a summer baby born in 1971 in Simi Valley, California, and I’ve been using masturbation as a sedative since 1991.”) She’s a female Howard Beale (of “Network” fame) on a smaller stage. She sings, cooks up dubiously healthful absurdities, and insults all those she thinks once spurned her. She also neuters dogs on camera to make a public health point. It is, literally, insane.

Director Shira Piven remarkable film is about a woman well beyond the verge of nervous breakdown. No one can rein her in because she’s suddenly rich, disarmingly pathetic and able to suck others into her self-involved fantasy world. Alice sleeps with the one of the brothers, seduces a student studying her “technique” and alienates her best friend.

She foolishly let her diagnosis “define who I am,” she explains to the world (a very limited TV audience). But others see a diagnosis plunging deeper into an abyss. It’s funny, yes, but no ordinary comedy. Black is the new screwball. Eliot Laurence’s script plays on deference — friends and family watch, mesmerized and embarrassed — and psychotic self-destruction, while careful not to spew moral judgments. It’s a platform for Wiig to incarnate the out-of-control but charismatic Alice, arrogant but also sublimely fragile. Alice is a resident of her condition, her show a toy, and Wiig never veers from a character she’s somehow slipped on whole. It’s a moving performance.

A film that appropriately opens with the Montaigne line “I study myself,” carries literally sick vanity to lunatic extremes, made credible by Alice’s altered state conviction that her life calling is to coax the world toward mental clarity through protein-rich meatloaf cakes and spewed anxiety. Director Piven makes no attempt to judge. She lets Alice be Alice and delivers an unconventional 21st-century fable that offers mental imbalance as a kind of deluded heroism. Given her thirst for theatrics, it is no accident her last name is Klieg.

Joan Cusack and Jennifer Jason-Leigh add to the mad mix as TV engineers who can’t believe Alice is on the air. David Robbins’ up-tempo score places a smoky, cheering patina over the darkness, creating a paradox of moods that sticks with the story throughout.