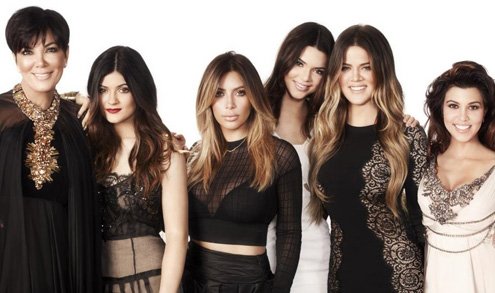 Keeping Up with the Kardashians: Hush, mockery!
I

f you haven’t been living in a nuclear bunker for the past decade, you’ve probably heard the name Kardashian-Jenner at some point. Maybe you heard it but forgot it. I’m here to tell you that forgetting is not an option.

Here’s a guide to the Kardashian-Jenner clan that may help you understand the controversies that surround TV’s 21st century icons. It may also give you some useful talking points when you’re trying to chat up a niece who seemed focused only on Justin Bieber’s new haircut (you’d be surprised how often it changes.)

First, though, a cast of characters: Kristen Mary “Kris” Jenner, age 60, is mother and manager (she’s trying to copyright the term “momager”) of Kourtney (36), Kim (35), Khloe (31), and son Rob (29), whom she had with Robert Kardashian, O.J. Simpson’s lawyer during his headline-making 1995 murder trial. When Robert Kardashian died of cancer in 2003, Kris remarried former Olympic athlete Bruce Jenner (now Caitlyn Jenner). The couple had two daughters, Kendall (20) and Kylie (18).

How did this brood become famous? Well, Kim was once a close friend of Paris Hilton’s. In 2007, a leaked sex tape of Kim with then-boyfriend, singer Ray J, pushed her into the spotlight (Paris had her own sex tape moment of fame).

Also in 2007, the Kardashian-Jenner clan got its own reality TV show, “Keeping Up With The Kardashians,” now entering its 12th season. This led to more spin-offs, more money, and attention from fashion designers and magazines (hello Vogue). The buzz culminated in massive dominance of social media platforms such as Instagram (Kim has 67.3 million followers; about eight million more than Italy’s population).

The Kardashians are often a lightening rod for criticism. They’re often accused of over-sexualizing themselves and creating bad body goals. Some see them as fake, superficial, and lacking in anything but celebrity “skills.”

Some of the criticisms are fair enough. But fairness aside, I still think they could use a pro bono Devil’s Advocate — so here I am.

About the sex thing: Yes, it’s true, the Kardashian women do tend to wear revealing apparel and post nude pictures with sensitive areas blacked out. But wait… Doesn’t this make them consummate 21st-century women who project sexuality by choice and not because they’re been told to do so by a man? Isn’t a double standard to say that Kardashian-Jenner nudity bows to male desires — that they’re objectifying themselves — while other women who post similar images (tens of thousands) are just “taking back their bodies”?

In body image terms, you can also argue the Kardashian women set more positive body goals than Paris Hilton or “Simple Life” friend Nicole Richie, who often looked emaciated. The workout minded Kardashians are known for their curvaceous bodies. How they keep them up — whether through weird diets or food fads — doesn’t matter. Isn’t better to encourage women to strive for toned, curvy bodies rather than the rail thin versions once pushed by Paris, Nicole and now by 5,000 supermodels?

Moving on to complaints that they’re a sham. Yes, they’ve had cosmetic surgery. Yes, they’ve also had vampire peels — a procedure in which you face is injected with your own blood.

But they don’t hide it. In fact, I’d argue that their candor produces envy and spite from those who’d want to be more open but can’t find either the courage or the words. A crucial turning point for Kylie Jenner came when she admitted lip augmentations, an admission Kim encouraged. You might disagree with their beauty philosophy and methods, which is fine, but to me their openness is refreshing (why say you have a deviated septum when you’re getting a face lift?)

As for skills, they have one of America’s finest: they sell themselves. You can argue that being filmed isn’t skill, but I’d bet a lot of people would wilt under the under the constant glare.

Image selling can make a lot of money, which the show has, but isn’t that also part of the American way? I’d also point out that they’ve created other sources of income: a chain of boutiques called “DASH,” “Kylie Cosmetics” (meet the Lip Kit), “In the Kitchen With Kris,” Kendall and Kylie’s clothing line, and a variety of apps. You might find that frivolous but in case you forgot, consumer culture is all about products.

One day when I’m old and grey and sitting on a porch, some descendant of mine will ask me to define the 21st-century American Dream. To which I’ll reply the Kardashians. They came from mediocrity and crassness and managed to reinvent themselves as tastemakers and media rulers. They’ve gone from Girls Gone Wild photo-shoots to Balmain models. And, at least in spirit, isn’t that what the American Dream is all about?