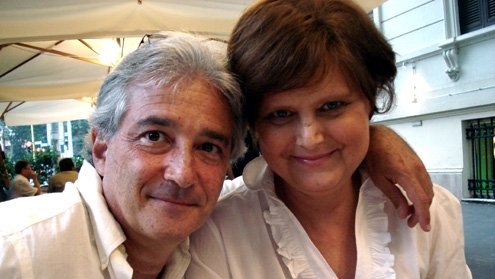 he Kitty-isms I remember are a dime a dozen. They usually began, “Well, I don’t know about that…” and “Do you really think so?” She’d leer just a little or flash her scowling cameo face. This was how she showed skepticism.

We met in 1986, when she was a beautiful twenty-something American girl in Rome looking for a job and I a too-young newspaper editor for a fledgling English-language publication called the “International Courier.” We had fresco-fresh offices on Via di Ripetta, far too chic to pay for as it turned out. The daily lasted little more than a year.

Kitty joined the core staff, a comical amalgam of journalists and would-be working class heroes who lived outside the affluent membranes of Craxi’s Rome. The great Socialist, a portly harbinger of corruption to come, lived fulltime in the Hotel Raphael near Piazza Navona. His assistants were coke-snorting party animals; his foreign minister a disco-hopping hedonist with female American “aides”; Italy’s was coming apart but we didn’t know for the thrill of young socialism, which sounded good after decades of septuagenarian supremacy.

Kitty, however, was suspicious. She had mesmerizing blue eyes.

“What’s with this guy?” The guy was Bettino Craxi. “He’s such a sleaze.”

No, I replied, citing his progressive foreign policy, his willingness to take on Ronald Reagan. Italy needed Craxi.

Nothing doing. From day one, Kitty had little patience for Craxi and his lieutenants. And even less for American Paul Marcinkus, who ran the Vatican’s finances and had been connected albeit vaguely to the Masonic Lodge scandal and the medieval-style death of busted banker Roberto Calvi who in 1982 was found hanging from Blackfrier’s Bridge in London.

We lived from scandal-to-scandal, much we do now. Plus ça change. A past no one studies is recycled and spiked with hyperbole.

Kitty cherished conspiracies. She was convinced Pope John Paul I had been poisoned. I disagreed emphatically. “Well, I don’t know about that,” said Kitty.

A lover of good gossip, she was a sassy preacher with “Poor Richard’s Almanac” in one hand and “Pilgrim’s Progress” in the other. She knew the secrets of every in-house romance and weighed in on each. Men couldn’t excuse objectionable behavior to male nuance. They were great or idiots, depending on how they behaved. Her loud code was ironclad. She was lovingly judgmental, an inviting paradox.

One day she went to Ostia to interview Soviet refugees — mostly Jews — awaiting transit visas to the United States or Canada, a process that usually took between a year and a decade, or failed altogether. “It’s like they’re in a beach labor camp,” she told me. “If they wanted to, they could just snap their fingers and make it easier for them. It’s a disgrace. They’re a bunch of idiots.”

They, of course, were the authorities — or illiberal authority, self-satisfied and aloof. The Puritan Progressive is nagged by social injustice. How you feel is an act of conscience. She felt a great deal and made it known. Every paper needs its clattering conscience.

On another occasion, as the International Courier’s finances weakened, diseased by mismanagement, she identified a would-be savior as dubious and warned me. I didn’t listen. Her instincts proved flawless. By spring of 1986, the paper was hobbled, its staff diminished. By summer it was on life support. In July it died quietly, a typical Rome summer death swept under vacation’s radar. I’d been thankfully fired ahead of the rout.

Kitty bolted well before the end, finding a refuge in freelancing. We lost touch for long stretches, she remaining in Rome to marry and raise a family. We met up again a few years ago and reminisced about those days. My first remarks were met with, “Do you really think so?” and “I don’t know about that…” Twenty-year-old gossip was a vivid as the day that generated it. Remember about Craxi, I asked her? — he died in Algerian exile in 1999, humiliated. “I told you that guy was trouble.” That and more.

“I stay alive for my kids,” she said, after which we embarked on a cheerful, hour-long chat about the afterlife. She’d become Catholic, but remained ever-curious. The cancer was already advanced. She was on the clock. “I’m ready for it,” she said, “Bring it on.”

By late this spring she was hobbled, diminished. By summer she was fading. On July 3 the other side brought it on. It will be delighted with its catch.