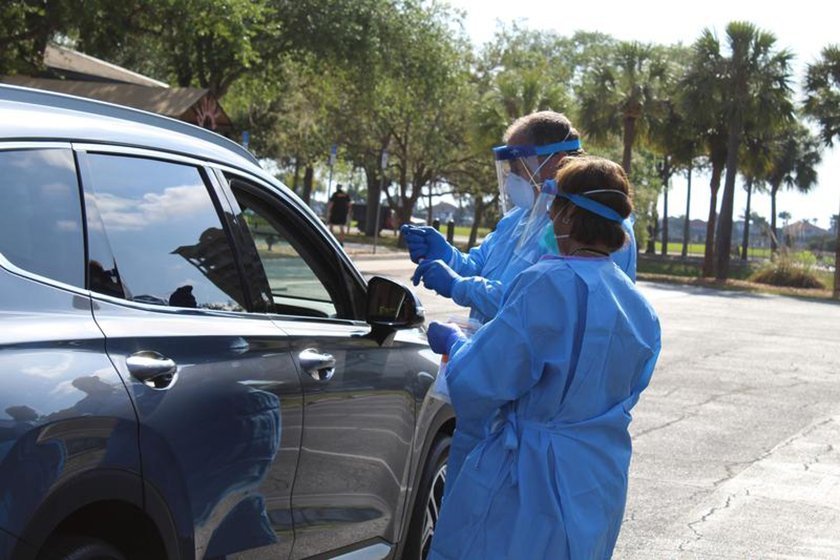 Until recently, the only way to get a COVID-19 test in Tallahassee, Florida was in a drive-through staging area.
S

idelined. Benched during the biggest story of my journalistic career.

My last two weeks in Tallahassee, Florida I’ve been forced into the role of spectator as other reporters do the work I should be doing, reporting on the coronavirus outbreak in Florida as the state took steps toward a partial reopening of restaurants, and fighting for greater access to the public records state officials kept secret.

As the number of infected and dead continued to rise, as it surged through nursing homes and prisons, killing young and old alike, I was afraid I’d join the roll call of virus statistics.

I woke up one Thursday morning with a fever and sore throat, feeling very weak. That was not like me. I never have a fever, even at my sickest. The fever set off alarm bells that shook my usual hypochondriac neuroses aside.

I called my primary care physician, who after listening to my symptoms recommended I be tested for coronavirus.

I also called my editor, which in turn set off a chain reaction of corporate procedures. He asked me if I’d been to the newspaper office — which we’d all been banished from weeks earlier per company policy — or been in touch with any coworkers. Yes to both. I’d picked up notebooks, pens, and other supplies to replenish what I’d used up while working from home. And it just so happened a coworker was there at the same time.

So he had to notify corporate HQ, which hired a company to deep clean the office and issue an edict that nobody could go into the newsroom for 14 days.

The fever set off alarm bells that shook my usual hypochondriac neuroses aside.

That afternoon, the clinical nurse faxed over a referral to the COVID-19 drive-through test site, which at the time was required for anyone seeking a test. The shortage of test kits and swabs meant only those exhibiting symptoms and holding a physician’s referral were eligible (that has since changed, with free testing now available in two local stadiums).

Tests were not for the idle and the curious.

The drive-through site I went to was located in the parking lot of a former shopping center about a half-mile north of my house.

It was run by the county’s largest privately run hospital, which was responsible for setting up the test site. Though Tallahassee is a city of 250,000 it has only two hospitals, both private. Publicly run or government supervised hospitals are a rarity in Florida.

Orange traffic cones dotted the parking lot, demarcating lanes for lines of cars. White tents had been erected at intervals along the course, with people under them waiting for customers.

I was there as soon as it opened Friday morning and found just a single car in front of me. I was frankly surprised at the lack of activity. I ran through a series of checkpoints manned by hospital staff carrying walkie-talkies.

At the first stop, they commanded me to keep my windows rolled up and place my driver’s license on my dashboard. They checked my ID and waved me through to the next stop, where a nurse named George again checked my ID and radioed ahead that I was on my way.

But when I arrived at the registration tent, the staff there said they couldn’t find the referral that had been faxed over the night before. Someone handed me a slip with some text and a fax number to give my physician so he could resend the referral. I left the test site and went home, called my doctor’s office and waited.

About an hour later I was told the referral had been resent, and I should go over in about 30 minutes. I gave it an hour and drove back to the test site, where everything went without a hitch, and nobody was ahead of me.

I steered my car under a white tent with several people wearing yellow protective gowns over their mercy-blue scrubs. They waved me in and a nurse beckoned me to lower my window and place the car in park.

After checking my name and birthdate, she explained how she was going to stick this long stick with a tiny cotton puff on the tip way up my nose, into the sinus passageway for about 10 seconds. “It will be painful,” she said.

I gritted my teeth and tightened my hands around the steering wheel as she inserted the tip into my nose. I winced, and even screamed a little bit. Nothing too embarrassing. I sprung a tear.

After violating my other nostril in the same manner, the nurse said cheerily, “That’s it. You’re done!”

Two days later, I received an email from the lab that had processed my sample telling me I’d tested negative.

Phew, I thought. What a relief. And then, almost instantly, came another thought: so what do I have?

I checked with my doctor on Monday, and he said that most likely it was seasonal flu, and it would pass in 10 to 14 days.

Though glad it wasn’t COVID-19, I was annoyed I’d be out of commission.

Great, I thought. Glad it wasn’t COVID-19, but still annoyed I’d be out of commission for another week or two. It felt like I’d gotten the wrong infection at the right time.

It hasn’t been easy.

I pass the time watching all the French New Wave movies I can find, making wonderful dinners for myself and keeping friends apprised of my health status. I keep my girlfriend at bay, wondering if our cavalier disregard for social distancing brought this on.

Two weeks passed and I only felt worse. My fever was a constant, so was weakness, fatigue, and dizziness. Even a phone call exhausted me, never mind a walk to the mailbox or just playing with the cat.

A blood panel followed to determine if what I had was bacterial. Basically, my doctor just didn’t know what was wrong.

So I was back where I started, waiting for lab results.

Finally, I got an email from the lab showing what my doctor had suspected. Mononucleosis provoked by the Epstein-Barr virus, a fairly common duo. Mono is what we once called “the kissing disease.”

Now that I know what ails me I’m relieved. But I’m also aggravated and impatient. I will have to endure at least another two weeks of this, the virus story, or my part in the story, for now on hold.