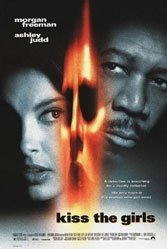 Bad guy Russians defeated, the thrill-seeking 1990s popped serial killers back into manufactured evil’s lucrative equation, eventually opening the door to a slew of graphic 21st century TV franchises including “CSI” and “Criminal Minds” (and their ironic spin-offs like “Dexter”). Hollywood’s homicidal thrillers moved from depressed and greedy bad guys to voyeuristically perverse women-slayers, erasing most of the creepy ambiguities that made an early and provocative appearance in “Silence of the Lambs” and earlier and more subtle productions.

Kate and Ben soon morph into avenging duo, sharing time and confidences in an effort to hunt down the handsome, twisted evil-doer. Fleder has two strong stars to work with and he understands pace, which helps. What he can’t escape is a cliché-ridden genre, endgame twist included. Its limitations are as heinous as the crimes themselves.