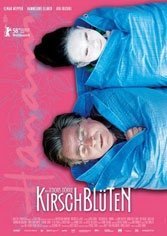 Musical director Claus Bantzer is this film’s nagging misfortune. Not because the German chorus leader hits a false note, he doesn’t. Instead, director Doris Dörrie demands he hit too many, with piano surges punctuating and distracting from virtually every instant of the film’s often moving emotionalism.

When small-town wife Trudi (Hannelore Elsner) finds out her bureaucrat husband Rudi (Elmar Wepper) is dying, she tells him nothing but instead persuades him to go to Japan where son Karl (Maximillian Brueckner) lives. Together, they travel first to Berlin to visit their two grown children (Birgit Minichmayr, Felix Eitner). Soon after, novelist Dörrie pulls a softly dramatic end-run, when Trudi, not Rudi, dies in her sleep while the couple is on Baltic shores. Unaware of his fated predicament, Rudi pushes ahead to Tokyo, and to Karl. It’s Tokyo, and finally Mount Fuji, that allow Rudi to reckon with what’s befallen him, and what’s to come.

The journey into self is beautifully and painstakingly accomplished, with Dörrie mixing German lyricism with Japanese “Butoh” dancing — stylized body movement — to make life dance with death. Apparently unsatisfied with her own pace, or eager to make waves evident, Dörrie and Bantzer conspire to accent the quest with piano notes. It’s a pity because the film stands on its own deliberate but honorable dramatic merit.