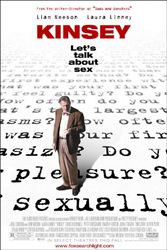 An ambitious, complex, and well-spoken film about the life and times of sex researcher Alfred Kinsey (Liam Neeson) and his wife Clara McMillen (Laura Linney) that stretches the Hollywood frame while remaining loyal to the conventions of mainstream storytelling. Neeson is obsessive and passionate in the role of Kinsey, the son of a Bible-thumping Midwest preacher who at Indiana University pioneered work in a subject that most of Puritanical America preferred remain confusing and remote.

An entomologist by training, Kinsey turned his attention to human sexuality to solve problems in his own marriage. His 1948 survey, “Human Sexuality in the Human Male,” discussed practices long considered off-limits, becoming, quite literally, a seminal work. In essence, Kinsey — who was bisexual — challenged America’s self-patrolled and enforced sexual ignorance by getting people to talk about bedroom intimacy.

Writer-director Bill Condon (“Gods and Monsters,” “Dreamgirls”) is compassionate and attentive in portraying Kinsey as too accepting of the tyrannies of research, to his detriment. Linney is exemplary, while Peter Sarsgaard ranges between them as pupil-turned-researcher Clyde Martin (“Fucking,” he tells the unfeeling Kinsey in a rage, “isn’t just something, it’s the only thing…”) One can complain about too much caricature and ill-timed mood music, but the film’s intentions are morally honest and vividly brave. This is fictional biography at its best.