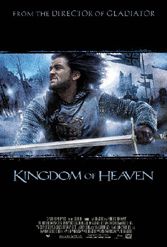 Ridley Scott’s epic of the Crusades has an ample secular conscience for a movie about the Holy Wars. But that’s new-age point, with the futility of Iraq as an implicit morality tale — “God wills it” is an excuse for the film’s most poignant folly. Orlando Bloom is Balian, a blacksmith-turned-knight — bastard child of Lord Godfrey (Liam Neeson) — whose intent is to atone for the sin of his wife’s suicide and the murder of priest. But when he gets to détente-era Jerusalem, contested between Christians and Saracens but at peace under King Baldwin, he’s gradually drawn into Christian decay.

Despite its nobility, the movie is self-consciously burdened by its unstinting liberal enterprise (“We fight for the people, their safety and freedom,” cries Balian, mounting his defense of Jerusalem; and later, on burning corpses: “God will understand, and if he does not, he is not God.”). Bloom is a poor man’s Johnny Depp who stirs little charisma into a character that (while diffident) demands but doesn’t get larger-than-life status. Until the climactic and effects-laden Siege of Jerusalem (a cat-and-mouse game between Balian and the Muslim warrior Saladin, historically from Tikrit), Scott moves forward almost coyly, which does storytelling no favors.

Quibbling aside, this is sure-handed filmmaking run by veteran Scott. Ghassan Massoud (Saladin), Jeremy Irons, and Eva Green add spice to the cast.