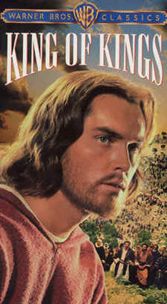 Of the many biblical epics Hollywood produced in the 1950s and 60s, this is most curious and very probably the best. Rip Torn as Judas? Absolutely. Director Nicholas Ray (“Rebel Without a Cause”) goes for Jesus’ words, not his special effects-inducing miracles. To do this, he casts wildly out of type. His Jesus is Jeffrey Hunter, a hot boy-toy of his time. But Hunter hunkers down. He’s still and sullen, time again urging his followers not to admire him but to listen to his words — a director’s game-within-a-game given Hunter’s golden looks.

The Sermon on the Mount, in which Ray’s Jesus refuses calls to the supernatural but wins followers almost head-by-head, is beautifully handled, assisted by Miklos Rosza’s memorable score. Other striking choices were Brigid Bazlen as Salome, a 16-year-old actor that Ray turned into a kind of ancient biker girl. But it’s against-the-grain Hunter, who died at eight years later at 43 of a stroke, who seizes the film wholesale and takes up mystic residence.