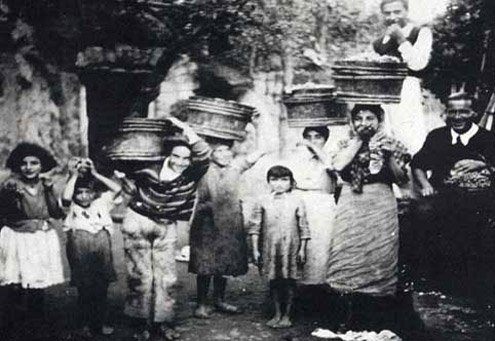 Now, the harvest includes tourists; once it was the property of the poor.
I

’ve gotten out my shears, my Wellington boots and my trusty gloves. It’s Italy’s harvest season and I’m eager to get going.

The so-called vendemmia, or grape harvest, has its root in the Latin word vindemia, or “removing from the vines. ” It begins in mid-September (white wine grapes), booms in October (red varieties), and peaks in November, that magical month of olive picking and oil production. An Italian Thanksgiving is a true thank you.

The grape harvest doesn’t follow specific calendar dates. Instead, it varies annually depending climate, rainfall, and the characteristics of local land, or terroir. A staple in any wine discussion, terroir stands for the many and subtle variables that differentiate the soil of one vineyard from that of another, even if the two are separated by just a kilometer. These include distinctions in soil composition, sun exposure, slope and incline, even in the hands of the vintner that daily coddles his vines.

Determining exactly when to harvest is based largely on assessing the sugar content in grapes at any given time. The longer grapes remain on the vine, the sweeter the wine that eventually emerges. Thus, whites come first, reds next, wrapping up with the grapes used for sweeter, more fortified wines — depending as always on region and the kind of production.

Harvests are entertaining because they’re not exclusive to local farmers or even the estate’s winemakers. Travelers and wine enthusiast come from all over to help out. It’s a fascinating and convivial experience that shows off the ancient winemaking process while emphasizing the importance of teamwork. As a bonus, participants get to taste local wine and eat hearty food.

Though it’s commonplace to take part in a grape harvest as a friend of a winemaker or as part of a tour, Italian law permits only insured contractors in the vineyards and fields. The picking process is both crucial and delicate, making some winemakers fussy about who handles their precious goods.

Once you’re part of a team, expect long days that usually get started at 6 a.m. — and that’s on the late side. Morning chill, fog and damp mud may accompany you throughout the morning, followed by scorching heat (you can tie the windbreaker you wore in the morning around your waist). Tall rubber boots (mud) and a hat (sun) are also a smart idea. Vignaioli (expert hired hands from neighboring towns) will usually hand you a crate and a pair of shears. They’ll also tell you the right way to cut and crate the bunched grapes. You’ll also get an allotted aisle in the vineyard row. Filled creates are collected by a supervisor at the end of the row and trucked straight to the wine cellar where the no-nonsense winemaking process begins.

Before grapes are transformed into “must,” a highly sweet (and laxative) grape juice that is later processed, fermented, and finally stored, clusters are processed by several powerful machines. One separates the actual berries from the stalks, or raspi. Another presses the grapes and mixes or separates the pulp from the skin, depending on the wine color. Since all pulp is alike, skin determines the color of the wine. Grapes destined for reds keep their skins. Grapes earmarked for whites have their skins removed and discarded, after which they’re crushed as part of a process that requires the fermenting of must. Primary fermentation (which often takes between one and two weeks) sees yeast convert most of the sugars in the grape juice into ethanol (alcohol).

At the end of the harvest comes a gargantuan feast chock with local foods copiously washed down with the previous year’s vintage. Such festivities go back 2,000 years.

Throughout the harvest, small and large events give participants a break. Dozens of Italian towns organize festivals and village fairs known as a sagra dell’uva or a festa dell’uva.

Marino, a castle hamlet about 30 kilometers south of Rome, can turn into party central. Some fountains are made to actually spill wine. Locals parade in medieval costumes and stage nighttime fireworks displays. Neighboring Frascati even hosts a jousting event. Similar revelry is on tap throughout the country.

The olive harvest is another universe. Olives are picked in chillier November, and the production process is more about brute force. Two things matter most: the hands of the picker and the centrifugal force that later extracts the oil from the drupes. Period.

Being part of this ancestral process is a quintessentially Italian adventure (try spending a few nights at agriturismo (tourist farm) that actually owns an olive press, or frantoio). Gastro-vacations let guests to participate in all production phases, including picking (with small portable rakes), usually in teams of three-to-five people per tree.

It’s a physically exhausting task that often involves climbing up ladders to reach the upper branches. And oil stains don’t wash out. Though larger farms depend on machine harvesting, small farmers still take immense pride in the traditional and healthier hand picking method. Another pleasure is watching the olive presses and oil mills as they rumble on day and night.

During the picking, or raccolta, olives are pressed continuously, with the oil bottled, stored or sold. If farmers don’t own a frantoio, they take their olives to local presses, striking deals and returning home with vats of bottled nectar. Pickers often prepare meals in a common kitchen, with friendships born around machinery and the dinner table.

After the first day of picking, inaugural droplets of “liquid gold” are drizzled on slabs of toasted bread, the celebratory bruschetta commonly called a fettunta (oily slice) in Tuscany. It’s my favorite moment. Complimentary perks include learning the nuances of flavor and acidity and getting deals on homemade organic extra virgin olive oil.

Olive oil is pressed as far south as Puglia and as far north as Liguria, with Umbria, Lazio, Tuscany and other central olive oil-producing regions in between.

Travel package opportunities are abundant. Some websites can help land you a volunteer harvesting job. Check out Workaway.info, which offers plenty of Italian opportunities, or the non-profit Officina Zone Umane, based in the unspoiled Lazio countryside of Monteleone Sabino.

Visitors to the north should consider a trip to the Museo dell’Olivo, the olive oil museum in the town of Oneglia, between Genoa and the French border.