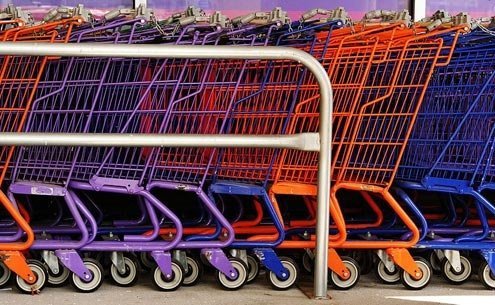 Nice day! Thank you. I looked down in my cart and found all of my groceries.
I

think people are getting kinder. Just the other day I was at the fantastically hectic Market Basket supermarket down the street from my apartment. The prices are the lowest in the Boston area and any day at any hour their parking lot is full. The checkout lanes are full. The aisles are a traffic jam of indefinitely abandoned carts and careening, colliding children.

My friend claims he sees anthropologists camped out there studying the conversation patterns of lingually heterogeneous groups in crisis. You hear Portuguese, Russian, Korean, Chinese, Spanish, Urdu, European (yeah, I said it), particularly German, but on most days it sounds like the entire European Union could be represented. Sometimes you hear the odd English conversation even.

Students at school talk about Market Basket, which was founded by Greek immigrants a century ago. It’s legendary and controversial. Are the savings worth the chaos and vice versa?

I’ve learned to slip on my headphones, grab a cart that handles well, and saddle on down the aisles, slowly. Patience is the key. The couples and families shopping around me often register high alert. They groan when a cart or child blocks the aisle. I worry about grocery road rage.

So when someone tapped me on the shoulder on my last trip, my stomach dropped. But when I turned I found a tiny Indian man beaming at me. Two feet behind him was his tiny beaming wife. “I think is mine. Please.” His wife nodded in agreement. “You eat Indian cheese? I think is mine.”

Then his wife began taking the things from her cart and putting them in mine. He reversed the procedure and in a couple of seconds I had all of their groceries in my cart and they had mine. The old couple smiled at me and waved goodbye. “Nice day! Thank you.” I looked down in my cart and found all of my groceries.

I’ve been told I am absent-minded. Maybe this proved the point.

Just before going down aisle 11 to get some pickled peppers, I’d left my cart tucked against the wall to grab yogurt in a particularly teeming corner of the store. I snuck out in a flash and dropped it in… the old Indian couple’s cart. Off I went. My own cart was left next to the deli sausages. It took them about five minutes to find me, smile, and begin the transfer.

But back to kindness, which is everywhere.

My new boss has a candy-dispenser museum in her office. Come on in whenever you want, she told me. True, she loves making people work just a little; you have to spin a knob here, or push a lever there. And, voila, handful of chocolate.

Then there’s my Italian film professor (I’m doing graduate work in Italian at Harvard). She sent me an email saying that because I’d handed in my paper a day late she’d have to give me an incomplete. But come January, she told me, she’d insert the true grade. She apologized to me for any inconvenience. Since when do professors apologize for late papers by students?

Headed to downtown Boston to catch my train for a holiday trip to Michigan, I had a suitcase and my snowboard on both the bus and the metro. Not one but two people fussed over me, helping me lift and hold it all.

People hold doors open. My brother laughs at my jokes. The lady at the counter at the corner store remembers my name and calls me by it when I stop in.

My mom is a smiler; she caught the kindness bug years ago and smiles expansively at everyone on the street. But she’s always remarked that few ever return her random smiles. Like her, I tend to smile at strangers, with different results.

The strangers smile back. Some even wave. Sometimes it’s a case of mistaken identity (“Hi Katy!”). But in most cases they’re just … smiling.

So why the kindness quotient upturn? Did Obama really deliver hope? Is the American national mood improving? Honestly, I dig Obama, but he doesn’t exactly make me hopeful, and evolution doesn’t happen fast enough to watch. Is it that the economy is picking up? That’s the most likely, and saddest, of my theories.

Given a choice, I’d prefer to think of it as a permanent and universal change, that the 21st century is generating an equal and opposite reaction to the events of its nasty predecessor. I have my doubts. But frowns turning into smiles on a regular basis? Now, that’s feasible.