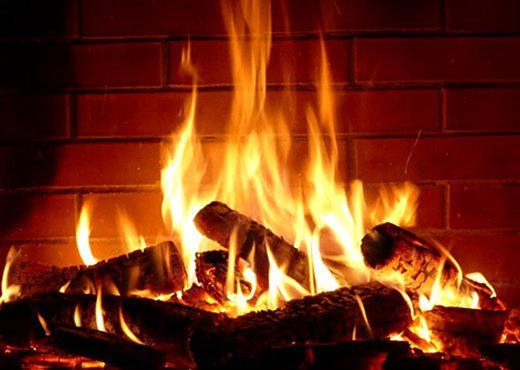 The sense of belonging offered by sitting around a fire is something TV can't match.
A

favorite childhood memory came back to me recently. My family grew up in a large house and we’d regularly spend whole evenings gathered around the living room fireplace. It was there that we told stories, caught up on the day’s events, and in my mother’s words, solved the world’s problems. All the while mesmerized by the lick and snap of the flames.

It was my father who would build the fire. Down on one knee he’d crumple old newspapers in balls beneath the iron grate. On top of this he’d add twigs that he first snapped over his leg. He’d pile all this lightly, making sure air could enter.

Eventually he’d add a larger log and the fire would roar with delight. Then, he’d join us around the hearth for family time.

All this rushed back to me while watching television.

Unlike many, I don’t have cable TV. In fact TV itself has never figured much in my home life. Mostly I prefer the quiet of my own thoughts. I keep a TV monitor so I can stream a movie to a larger screen, though I rarely do.

Not long ago a friend suggested I hook up an antenna to receive local channels in case of an emergency or to stay informed on weather-related events. It also seemed like good backup in the event the internet went down.

I picked up an antenna at the local electronics store and connected it to the back of the set. I changed the TV source to “air,” and instantly sounds and images appeared.

I then sat back in my favorite chair, remote in hand, and began exploring. I pulled in the three major American networks and others I didn’t know existed. One called Laff aired old sitcoms. Another named Grit featured old Westerns. There was a channel for the New York mayor’s office and several in Spanish.

The television had turned into a soothing modern-day hearth —complete with its own mesmerizing flicker.

The Laff channel was busy with reruns of the 1990s comedy series “3rd Rock from the Sun.” I caught the end of an episode. I then found talk show host Ellen DeGeneres. Wearing white Converse shoes and a perky smile, she interviewed actor Bradley Cooper before an adoring audience. I also found the soap opera “General Hospital,” which began airing in 1963. Life in the hospital is as fraught as ever nearly 60 years later.

Elsewhere, “Access Hollywood” informed me that singer Taylor Swift had a new album. On the quiz show “Jeopardy,” a contestant with a 16-show winning streak won yet again. The BBC, meanwhile, was all about politics and global headlines. In short, there was a lot going on.

The onslaught of commercials was new to me. Drugs of all kinds. Remedies for maladies I’d never heard of. Pet insurance offers. Cars of all kinds, always on scenic highways.

Though I’d just wanted to find out which channels I received, hours had passed and my body had sunk into the soft armchair and. I felt relaxed and transported. I felt comfortable and deeply at home.

It was then that my childhood memory made its appearance. And I understood why.

The television had turned into a soothing modern-day hearth —complete with its own mesmerizing flicker. It shared drama and social warmth. Sitting around it, I felt connected in the same way I once did with my family.

But it wasn’t with my father or siblings over a crackling fire. Instead it was with my fellow TV-watching Americans. We were all entranced by the same stories and news, TV conferring a sense of shared experience.

Suddenly aware of this, I grabbed the remote control and turned the set off. The screen went black. Gone was the flicker and buzz, the vintage shows, the endless drama. The news and entertainment would go on without me. I understood better why I’d pushed TV away in the first place.

Now I was back to my natural habitat, the world of my own drifting thoughts in the quiet of the day.