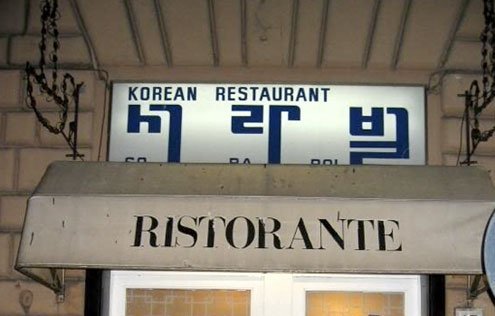 Why are we even sitting here?
I

t’s early July and I’m sitting with Alex in a Korean restaurant in Rome’s Esquilino neighborhood. There is no air conditioning, and the place is empty except for a table in the back room occupied by what looks to be a Korean family having a special occasion meal. It is a very plain restaurant, neither clean nor dirty. Alex is a vegetarian, and I’m one tonight for the simple reason that I’m distrustful of the kitchen’s hygiene. Why are we seated there at all, one might be inclined to ask?

Alex and I both grew up in the Washington, D.C. area, and both of us have been flirting with Rome for much of our adult lives. Alex has dual American-German citizenship, and for a while taught at a university in Beyreuth, Germany. He made his way back to Rome eventually. I haven’t left since I moved here in 2003, which is beginning to feel like a long time.

I feel I speak for many Americans abroad when I add that we are hungry for what we call “ethnic food.” So hungry are we that we will sit down in a Korean joint about which we know nothing just to feel like we’re in New York for an hour or two. The fiction works, if you disregard the waiter’s choppy Italian. My eyes keep veering off during conversation to a Korean news station on the TV behind Alex.

Talk revolves around the usual topics: racism, conspiracy theories, literature (Alex is reading Roberto Bolaño) and of course food. I begin telling him about a woman named Layne Mosler who writes a blog called Taxi Gourmet. The idea is that she makes her way into various NYC taxis, asks the driver where the best place to eat is, and pays him — or her — to whisk her off to a great meal. I add that our restaurant is just the kind of place Layne would write about.

What is it about taxi drivers? Do they possess what might be called food wisdom? Mosler began Taxi Gourmet in Buenos Aires, moved to New York City, and last year embarked on a voting campaign among readers for her first European destination. Rome was on the list of possibilities, but Berlin won out and now she’s writing up her summer adventures in the German capital.

It has been suggested to me that I turn this column into a similar venture. Part of me has always wanted to be a food writer. It’s the same part of me that has always wanted to be an astronaut. It’s a vocation I find fascinating. I briefly toyed with the genre when I was in New York, penning a six-line poem — on commission — praising a midtown falafel chef named Muhammad Rahman. It ended up, fortuitously, in the New Yorker. But do I really need to eat that much? Do I really want to look like A.J. Liebling?

And that’s not even to consider funding such a project. Layne Mosler has recently become a cabbie herself, perhaps to earn spending money for her blog exploits. She has also raised money directly from her readers. They, in effect, are sending her to Berlin. Now she is working on a book based on her considerable experience.

In Joseph O’Neill’s recent novel “Netherland,” a minor character is a New York food writer whose job it is to eat in taxi driver-frequented holes in the wall. He is unimpressed. “‘Cab drivers?’ he said. ‘Have you ever heard one of these guys express an opinion that wasn’t complete bullshit?'”

For my part, I once jested in this column that I could cook as well or better than most of the restaurants I’ve eaten at in Rome. Some accused me of hubris, and I understand why. But of course I don’t normally eat at five-star restaurants. I eat at cheap to mid-priced places that should offer better fare than they often do. That was my gripe, and it still is.

Back to Alex and me and our Korean dinner. There isn’t much on the menu for vegetarians. The waiter appears perplexed when I ask for help. He points me to a bean curd soup, which looks benign enough. I hear my wife’s voice in my head, “Don’t order the anaconda!” We had a bad experience in a Chinese restaurant in Portugal on our honeymoon, and she subsequently struck all Far Eastern cuisine from the shrinking list of non-Italian foods she will consider eating. Bean curd it is.

We pick at the kimchi, the marinated cucumbers and shrimp omelet. Alex scarfs his Korean pizza. I raise up my spoon to find a mysterious clamshell in the midst of the tofu mess. It is still burning hot. We pour more Tsingtao into our glasses and discuss Hitler, blogging and the paranormal. When our meal is over we head for the metro, where the train doors close on us in mid-debate.

The next day I write Alex an email: “Next week I choose. Ever tried Ethiopian?”