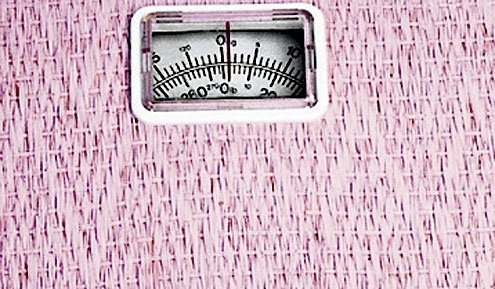 rowing up, my mom always jokingly warned me that I should enjoy eating whatever I wanted, whenever I wanted while I could. She’d say, “Enjoy it now while you’re still young. Because when you get to be my age, it’ll be harder to work off.”

Boy was she right.

As I’m fast approaching my thirties, I’ve noticed my metabolism is having a hard time catching up. And I’m not the only one who’s noticed.

After a five-course Calabrese meal prepared by my suocera one night in Bovalino, Fabio’s mom turned to me with a very serious face and passingly said, “So, you look like you’ve put on a few extra pounds if I’m not mistaken.”

My face reddened a bit.

She was right, though I’d never had anyone blatantly point it out quite that way before.

Honesty is something I usually value. In this case, however, a little white lie certainly wouldn’t have killed her. So I fessed up. “Beh si, un pochino,” I told her.

She sighed and shook her head disapprovingly. Tisk, tisk. “É un peccato perché sei una bella ragazza,” “It’s a shame, because you’re a pretty girl,” she told me as if it were too late to turn back the clock. I’m damned forever. Her husband echoed her disapproval, “è veramente un peccato.”

I turned to Fabio for help. But he simply smiled and continued reading his Gazzetta dello Sport.

Though there was no reason for me to justify my recent weight gain, I did it anyway. “You see first there’s work,” I said, “then there’s school and well, I want to go running, but there’s no one to go running with…” And the list went on.

She didn’t buy it.

“Eh si, capisco. Ma, un chilo non fa niente,” she said. “It’s when you gain two kilos, you should start worrying. Because those two kilos call up the third and the fourth kilos. And well, that’s where all the trouble begins,” she explained.

Mind you, just prior to our kilo-convo, she was stuffing my face with salsiccia, Calabrese cheese, parmigiana, and other “light” entrees. Just 30 minutes ago, all she kept saying was “mangia, mangia.”

Then they started drilling me on whether my eating habits: Had they changed or not. Fabio, meanwhile, is on page four of his sports paper. Fabio’s dad looked at me and said, “You know why we Italians are so thin? It’s because we have the best diet in the world! You have to stop eating like Americans do.”

Small newsflash. Been in Italy almost three years. Changed my diet a long time ago. It’s called pasta, pasta, pasta and more pasta. And vegetables of course. I don’t know how much more Italian I could get than that. While he did agree that this was a suitable diet, he strongly objected to my cornetti addiction.

His mom disagreed. “The girl needs to eat a little bit of sugar at least! If not she’ll get sick!” she yelled at her husband.

Suddenly, I realized my participation was no longer required as they continued to debate how much and what I should eat.

Fabio finished his paper, almost as if he hadn’t even picked up on what we’d been talking about for the past half hour and said to me, “Let’s go get a granita.”

And off we went.