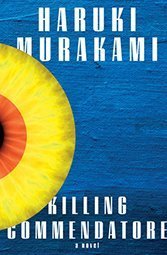 By Haruki Murakami , translated from the Japanese by Philip Gabriel and Ted Goossen

Once you get past the requisite hosannas, and they’re ample for a writer of Harukli Murakmi’s rank, his sprawling new novel displays little that he has not covered before, and more pithily, in previous efforts. These days, though, editors seemin short supply and those on active duty apparently willing to kowtow before name authors (and others) license to ramble. And ramble Murakami does.

The narrator of this circular story is a thirty-something portrait painter on the run from his broken temporal life, love, marriage and the kind of coherent self-awareness that keeps life from feeling ethereal at all times. In search of psychic safe passage, which to Murakami is an often means new riddles, he heads for central Japan and the Odawara mountains. There, he finds a retreat that will soon furnish a plethora of odd happenings that too often seem like whimsical impositions —as if Murakami were enchanted by the idea of baking a pie using every ingredient on ample, too often mistaking platitude for punch: “Look deep enough into any person and you will find something shining within.” Words such as “mist” and “fog” are always on the prowl.

The painter, now set on becoming a landscape artist, is instead sprinkled with Murakami angel dust and compelled to enter his maker’s bloated magic land.

Every night, a John Donne bell tolls, source unknown. Could it be the painter is being sent a message, better still, otherworldly inspiration? The narrator also has bundled away a painting titled “Killing Commendatore,” a rendition, Japanese style, of a scene from Mozart’s opera “Don Giovanni.” Soon, what was intended as an escape from a burdensome world turns into a Hotel California of the supernatural. Murakami, once an orderly writer, loses himself in the mix (the narrator’s wife comes up but she’s never fleshed out). No one’s around to gather up loose ends, let alone give his canvas a center of gravity.

No, this is Mirakami as Jackson Pollock, confidently playing by his rules only.

Finally, the narrator will wrap up his spiritual detour and head home – the novel’s end is in fact at the start. But overall the journey is far too dense, fat almost. The number of asides can make you think Murakami has decided to rest on his laurels, tantamount in his case to paying homage to mystery for its own sake. At one point, the (typically cool) narrator is convinced life in the retreat has fired up his creativity. He’s painting with “real expressive power,” he says. He adds, “What I’d created was, at heart, a painting I’d done for my own sake.” He could say the same for his creator’s novel.