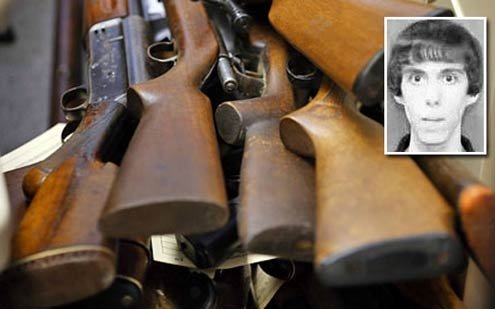 Adam Lanza, inset, used three weapons (not pictured) in his school attack.
A

t age 17 I had a Remington semi-automatic rifle. I used it dangerously in the Connecticut community in which I lived, and ultimately put it down thanks to my upbringing and the community that surrounded me, not because of any law.

My best friend had the same kind of rifle and would go the garbage dump in Weston, Connecticut on Friday nights to shoot rats and drink beer. He was a marksman. His father was a Navy captain and he learned early about guns and safety, was in the high school rifle club, and went to the police firing range regularly to practice. He took me to get my gun license, buy my rifle and ammunition, and then once to the firing range to learn how to load and shoot. Easy.

When you shoot rats at night you strap a flashlight on your rifle, shoot into a large mound of garbage, and watch as a sea of rats looks back at you, red eyes glaring. Then you start to take them out. It was exciting and scary – because once you start shooting the rats stampede and screech.

My excursions ended the night the rats charged us. One ran up my leg. I almost shot my foot off. Then the police showed up and hauled us off to the station. After being read the riot act we were released with a warning. But I was not stripped of my rifle and I didn’t stop using it.

From there I learned I could go to a field and shoot birds out of the sky, but stopped when I heard a mother off in the distance screaming for me to stop. I shot at trees outside my bedroom and then one day found myself swiveling and pointing the rifle into a neighbor’s window. I slowly put the rifle down shaking and got rid of it the next day.

Looking back, I knew that I was standing on the edge of a dark place into which I did not want to go. I also knew I had friends, a family, and was part of a community. I was not isolated. I had no reason to strike out at anyone and I was afraid to lose the connections I valued most. That said, the law should have prevented my possession of the weapon from the start.

Mass murderers are routinely individuals poised on the edge, often living in their own isolation. Their attacks can be keyed by an event, linked to revenge, or tied to jealousy or hatred. Yet their actions are solitary cries for help. But when they kill innocent children, their thunderous message of a profound need for society’s support acquires unparalleled power.

American gun culture breeds palpable fear and diminishes public discourse. At the same time, however, a high value is placed on gun ownership, often at the expense of accepting social programs such as national health care. Italy’s culture is a good example of the opposite.

Italy has some of the toughest gun control laws in the world. Enacted by dictator Benito Mussolini to control the populace and send a message to his adversaries, the laws remain on the country’s books. To own a firearm in Italy you must establish an acceptable motive, such as hunting or self-defense (where there is a proven need). The permit process is rigorous. Private ownership of military-grade or assault weapons is out of the question.

Italy’s constitution does not allow the right to bear arms, and there are roughly 11 guns per 100 residents as opposed to 88 per 100 in the U.S. But since millions of guns in circulate in Italy illicitly, it’s unrealistic to suggest that a person could not acquire a gun to carry out a premeditated killing.

No, in Italy there is something more. This is a society that prizes cohesiveness, exalts longstanding family traditions, and nourishes a basic architecture that all but demands interpersonal interaction. It has a national health system that also encompasses mental health care, guaranteeing the availability of care to all. These details matter. Either consciously or unconsciously, they transmit a basic message that we are in this life together.

Should I have been able to buy a semi automatic weapon? No.

There was no good reason for me to have one. I had no formal training on its use and no sense of responsibility for the danger it carried.

Legislators in the U.S. have done their best to prevent progressive gun laws from seeing the light of day. But monumental governmental gridlock hasn’t stopped lawmakers from passing national health care legislation, measures that are at the core of a more closely knit (and potentially stronger) society. This spring, the U.S. Supreme Court will hear arguments on challenges to anti-gay marriage laws and now, with the Sandy Hook Elementary School tragedy as a catalyst, the battle over gun control has been ignited anew.

This is a critical moment, one in which serious new gun control legislation might actually be in reach.

But such laws, if passed, need go beyond mere ownership restrictions to reflect a broader understanding of the human condition.

With a young and untrained finger on a rifle trigger and vulnerable target in its crosshairs, I know that what happens next depends on what’s going on in the head of the shooter. In my case, without the restraint that a connection to society imposed, that trigger could have just as easily been pulled.