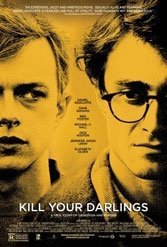 American director John Krokidas’s stylish but sometimes strained debut focuses on a little-known incident in the lives of several American 20th-century literary heroes, poet Allan Ginsburg (Daniel Radcliffe) foremost among them. In 1943, Ginsburg enrolled at Columbia University where he fell quickly under the sway of the Rasputin-like Lucien Carr (a superb Dane DeHaan), a troubled fellow student with a checkered history. Carr, part of a circle that included William Burroughs (Ben Foster), Jack Kerouac (Jack Houston) and a former professor, David Kammerer (also Lucien’s lover), conspired to generate literary hijinks intended to subvert old school meter and rhyme and liken it to intellectual fascism. The boy-men, minus Lucien’s possessive Kammerer (Micheal C. Hall), are intent on throttling morality into hedonistic submission by following Yates-generated illumination (“To be reborn, you have to die first.”)

So far, so good — until “Ginzy” becomes the leeching, opportunistic Lucien’s no. 1 friend and lover, leaving David in the lurch. So begins an awkward conspiracy that ends in a murder. Krokidas adroitly portrays the period’s closet homosexuality — gays are “queers” or “fruit” — and effectively conveys the complex bond between the manipulative Carr and the cloying Kammerer. It also draws a sympathetic portrait of a confused Ginsburg (“I don’t want to be the person they think I am.”) eager to get out from the shadow of his poet father and mentally unstable mother, whom he adores. But once the roles are set up, so is character behavior, setting the scene for repetition and crassness (a knifing is overlapped with homosexual penetration).

Still, it’s a fascinating vision of the young American writers eager to make a name for themselves during World War II, writers who would later form the core of the Beat Generation (Ginsburg, Burroughs and Kerouac in the forefront). What Bill Burroughs calls “the Libertine circle” suddenly comes undone, but its portrayal is memorable.

While Krodidas’ version of Carr comes off as a talent-less moocher who depends on others to make him shine, the truth is that he, too, was a gifted writer, later becoming a correspondent for United Press International.