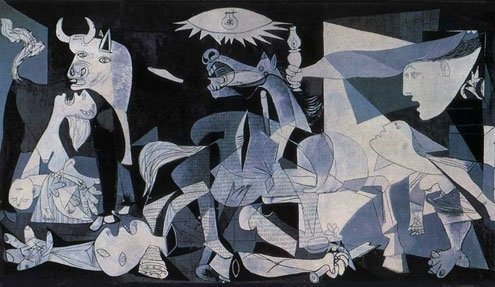 he esteemed American general who once said was war was hell didn’t live long enough to bear witness to Lucifer’s shifting priorities.

Between 1600 and 1914, wars were largely set piece confrontations in which rival forces clashed far from populated centers. Rationalism defended war as an expression of nationhood symbolized by ennobled legions following orders while keeping civilians safe. Anything else was barbarism or vandalism, named after the Germanic Vandals who overran much of the Roman Empire in the fifth century.

World War I, the first modern global war, attached itself to this rationale. Millions died or were disfigured in gassy trenches but Europe’s major cities were spared, its populations transformed instead into horror-stricken voyeurs. The sinking of the British liner “Lusitania” by a German submarine in 1915 grossly dented the civilian-military protocol and helped push a reluctant United States into the war.

By the 1930s the tone had changed. The Spanish Civil War reignited the thrill of destruction thanks to an irresistible toy known as the bomber. In 1937, German and Italian planes flattened the Basque city of Guernica in support of Franco’s Republicans.

Intellectuals were stricken but mesmerized. Pablo Picasso named a mural after the city, an abstract ode to helplessness and the travails of the innocent. Writers took up the themes of innocence lost and incipient barbarism.

But literal shock and awe proved too irresistible. The Nazis soon leveled Rotterdam and routed civilians. Their invasion of Russia woke the pre-enlightened past, with the rebounding Soviet Red Army exacting a scorched earth toll as it plowed vengefully toward Berlin.

Meanwhile, British and American strategists used carpet-bombing to cripple Germany. The arousing excitement of firestorms facilitated the creation of a hideously powerful new explosive that the U.S. dropped twice on Japan in 1945, making Picasso’s indignation into a romantic relic. Rules were called malleable in the grand fight between good and evil.

But the atomic bomb proved a killjoy. National governments were soon forced back toward 19th century caution, lest they invite annihilation. Nuclear war was the new barbarism.

America fought in Korea; India, China and Pakistan battled; and France tried but failed to hold on to Algeria and Vietnam. All were conventional fights.

But the Vietnam War again reshuffled the deck. Exasperated by guerilla attacks, the U.S. began World War II-style bombing of the North Vietnamese capital of Hanoi and the port of Haiphong. The B-52s would “bomb it back into the Stone Age,” said U.S. Air Force Chief of Staff Curtis LeMay.

Another Air Force general and LeMay pupil named Thomas Power openly advertised “limited” nuclear war, particularly in discussing the Soviets (“Restraint! Why are you so concerned with saving their lives? The whole idea is to kill the bastards!”)

With nuclear weapons off limits, Vietnam got cocktails of lethal chemicals and defoliants. Their savagery failed, as did the war, which ended in debacle, with militarists claiming humanitarianism had no place in war.

Since then, the military has lost most of its 19th century clout and nearly all its public sheen. In the U.S. it’s a volunteer force disconnected from the middle class that once provided some of its conscripts.

As a result, strategy is hemmed in and ambiguous. In Afghanistan, the war approximates caricature. Casualty-limiting strategies are the direct opposites of Power’s “kill the bastards” and a gift to unfettered insurgencies, which willingly sacrifice their own to gain advantage. Determined not to repeat its Afghan experience, Russia extinguished the Chechen insurgency by literally out-murdering the other side.

Asked about a standing civilian-oriented directive that limits reprisal air and mortar attacks in Afghanistan, Gen. David H. Petreus dissembled. Rules of engagement should be “even throughout the force,” he told Congress, though battlefield evenness is rare. He agreed that chastened commanders might be “more bureaucratic or more restrictive than necessary.”

Winning hearts and minds is the new white man’s burden, minus the big stick. But the real paradox is civilized war: applying decency the inherently indecent to assuage centuries of guilt. At the same time a cautious war can demoralize hired troops, who are trained in part as professional killers. In that sense, Iraqi prison vileness filled in for the atrocities no open front permitted after the real-war viciousness represented by the retaking of Fallujah.

Civil War Gen. William Tecumseh Sherman made the “war is hell” comparison in 1880 to wake up would-be soldiers to what lay ahead if they joined. He also urged “vindictive earnestness” against Sioux Indian tribes that had raided and slaughtered Western-bound settlers. Credibility depended on killing their men, women, and children.

Tempering hell by dulling pitchforks discredits credibility, both vindictive and enlightened. Winning hearts and minds while also trying to kill bastards is the worst kind of black comedy. The final result is that the show closes.