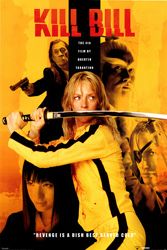 Only Tarantino can turn comic books into first-rate bubblegum, the kind with flavor that doesn’t quit out after five minutes. These are martial arts action flicks fueled by All-American Saturday matinée adrenaline, creating a near-perfect genre meld. The Bride (Uma Thurman) is shot up and left for dead by assassin honcho Bill (David Carradine) and his Deadly Viper Assassination Squad. The Bride wanted out of the Vipers, but, bang, she’s gunned down at the alter. (Oh, a little detail: she’s pregnant.) When she wakes from a protracted coma, it’s revenge time — told in chapters.

Tarantino adores Thurman and Thurman loves him back, morphing from distressed damsel to martial arts queen in blink. Volume 1 swashbuckles through a rash of ritual killings and climaxes in an epic Kung Fu gang fight that pits The Bride against a multiplying gang with O-Ren Ishii (Lucy Liu) as the target. It like violence orchestrated by Busby Berkeley. Volume 2 settles down (relatively speaking) and focuses on The Bride’s final task, tracking down Bill (and, you guessed it, their daughter).

The violence is fierce throughout, but Tarantino drops in animated sections to remind you it’s just a movie. The stylishness of the undertaking is matched only by its distinct compassion; characters lay down challenges before attacking. Honor does matter. Great stuff.