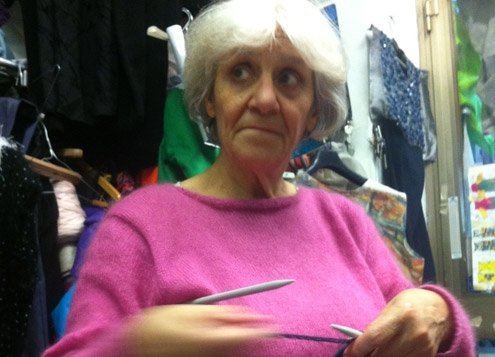 Enrica Pavesi, "Kika," in her Milan store. All photos by Barbara Tarricone.
Y

ards of colorful linens, silks and cottons are stacked precariously on the floor, tower on shelves, and spill from the cutting table, itself awash in buttons, thread spools and the occasional crumpled sewing pattern. The tiny shop looks like it’s about to burst open with colors and garments, all of them packed tightly and hanging on mismatched clothes racks in various stages of completion, or, if finished, placed by the store window or even hung from the ceiling. A wooden mannequin has been shoved to the back of the shop and out of sight — it would take up too much space up front.

Kika the owner of this sewing lab, queen of her realm, hasn’t had time to finish the sleeveless garment hanging on the mannequin. Instead, she’s moved on to another idea, which she needs to finish by day’s end since she’s promised it to a client.

I find her hunched and busily knitting in her chair by the store entrance. Hand knitting. It’s a rare sight in this day and age but a familiar one to the residents of the central Milan neighborhood of Porta Venezia.

On and off, Kika, born Enrica Pavesi, has owned a store in the neighborhood for nearly half-a-century (Kika, Laboratorio di Maglieria e Sartoria, Via Panfilo Castaldi, 32; tel. +39.338.381.5945). She’s as much a local landmark as nearby Corso Buenos Aires, with its chain stores, ice cream parlors, and tourist traps.

Kika has two helpers but only one is human. The other is Milo, a tiny mixed-breed lap dog camped out at her feet that yaps ferociously at all interlopers. “Che carino,” quips Kika, “he needs attention.” Cute might not be the word.

But a moment later, oblivious to Milo’s growling, grey-haired Kika returns to knitting, focusing on the progress of the woolen maxi dress, her walking cane by her side.

“It’s the first job I found out of the orphanage,” she says of working as a seamstress. “I was 16. I needed to support my mum, who was a widow and had to give me up to the orphanage because she couldn’t support me. So when I got out I went to work for a knitwear factory close to Piazza San Babila.”

Mostly self-taught, Kika opened a store in the late 1960s. A single mother, she’d already lived for a year in Saint Tropez. On vacation, a wealthy storeowner spotted her while she was crocheting a bikini for her infant daughter. The job she got changed her life. “I realized that that was what I wanted to do: sewing and knitting. Dressing women was like playing with dolls for me.”

Back in Milan, Kika went into business. Though her life story is rife with poverty and hardship there’s no self-pity. She focuses instead on the fairy godmother-like appearances of women who helped her out or pushed her the right direction.

One bittersweet recollection involves an extremely wealthy American woman who bought a large quantity of hand-knitted sweaters. Kika says the woman pleaded with her to relocate to the United States where she promised to put her into business. Kika says she resolutely rejected the offer. Only later did she realize that the woman’s unmistakable blonde bob belonged to Anna Wintour.

Kika comforts herself with her local clientele. Singer-songwriter Enzo Jannacci and actor Giorgio Gaber were both lifetime customers and friends — both died in recent years. Jannacci, she says, loved her work but was also impressed by the fact she knew all of his lyrics. Gaber appreciated her childlike honesty. “When I met him for the first time I told him I thought he looked like Giorgio Gaber, but that it couldn’t be him since the real Gaber was much taller!”

As we chat, people walk in. The soon-to-be daughter-in-law of a famous Italian designer stops in to have her vintage miniskirt altered. Milan socialite Pinina Garavaglia also makes an appearance, along with a local African street vendor who just wants to say hello.

Kika can’t do without these visits. Chatting is second only to playing matchmaker. Her business cards, printed at home, show Cupid beside her name. “Many neighborhood kids wouldn’t be here if it weren’t for me!” True to her reputation, she introduces two completely embarrassed and apparently single customers, immediately encouraging them to date.

Kika held her latest “fashion show” in the theater of a Catholic school loaned to her by the principal. TV personality Nicola Santini was the talk of the catwalk, while most of the other “models” — men, women, and kids — were residents of the building that houses Kika’s lab.

She’s also had politicians as clients, including former Prime Minister Silvio Berlusconi. (“He ordered lots of cashmere sweaters, all of them blue, course.” Blue was the color of Berlusconi’s first party, Forza Italia.) She says she’s also designed for Berlusconi’s fiancée, Francesca Pascale.

“Her blouse is a creation of mine,” she says, pointing out a magazine clipping.

And with that she gets back to knitting.