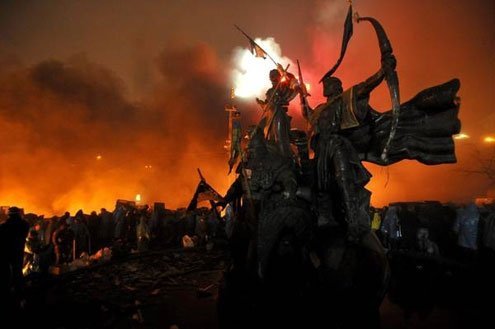 e are poised between two worlds. One is feral, primal, and ripe for sudden fury; another knows this rawness and blocks it through reason, collective morality, and the rule of law. Yet reason’s sheaf can fray, leaving the rational in harm’s way. Verbal abuse is followed by physical confrontation that moderns insist they have under civilizing control but often do not.

Ukraine’s domestic abuse illustrates the point. For hysteria-friendly media — both its mainstream and social networking branches — idealistic “pro-Europe” militants became fodder for security force working at the behest of an incumbent (now ousted) pro-Russian president sketched out as a heartless bully ready to murder his own people.

In Western eyes, Kiev played host to a David vs. Goliath morality play in which truncheon-wielding police declared war on would-be “innocents,” who were in fact anything but (had the protest been along no-global lines and in a more Western city the vantage point might well have been reversed, with besieged police ennobled and Molotov-tossing militants made vile).

In fact, the transformation of Kiev’s dissent into lethal urban warfare had less to do with idealism torn asunder or political priorities than with a sudden and collective shredding of the just-mentioned protective membrane that divides reason from all things indiscriminate.

The street rivals, both under warping pressure, eventually set aside the moral and the modern to enter into a red meat showdown governed by primal mayhem of the kind that reports only to the raging hormones of the parry-and-thrust fighters themselves, their lurches doing the bidding of a constantly recycled animosity. It is just the kind of feral passion ancient lords and masters knew to muster and marshal, forging centuries of conflict from the willingness of ignorant men to grow engorged and charge.

Take a moment away from Twitter and read “The Iliad.”

While text-sending noncombatants, impressed by the fury around them, chose to frame the Kiev clashes in rational terms, one side against another, the fighting itself unraveled into an adrenalin-fueled male nocturne unconnected to European belonging or president-hating and more in line with pitchfork vendettas on a loop.

Such violence is self-serving and self-sufficient: each side suffers reversals and vows revenge, with news of the brawling spreading to those remote from the aims at hand but who want into the shared ejaculation. Urban trench warfare slakes its own carnal thirst — look at Cairo. It is bitterly grand entertainment, with faraway onlookers, like Coliseum spectators, in awe or sighing deeply.

While it’s true the Kiev clashes arose from a rational political dispute about the country’s East-West future, the primordial seizures that followed again showed how quickly humans will veer away from engineered civility into fire and brimstone.

As in Syria, where the stakes are far higher and respect for human life lower, calls for Kiev restraint went nowhere, with the testy combatants unwilling to back down until the savagery was quenched and points won. To those involved in drawn-out domestic battles in which only survival and success matter, the horrors that undo moral observers are all in a day’s work. The Syrian civil war is in many ways kin to countless medieval European family and religious feuds, some of which, futility aside, lasted centuries and left millions dead.

Fortunately, Ukraine’s comparisons to Syria are superficial. Kiev’s weeklong spasms were just that, a colorfully sinister aberration that overjoyed video peddlers in search of reality that can’t be staged. It also dished out an exquisitely awful flip side to the Winter Olympics’ pretty but slick idealism.

Say what you will and wish about cruel presidents, or about the noble or meddling European Union; weigh in if you must on the tussle between American and Russian interests; even exalt the upside of Kiev’s Olympic Games-timed semi-coup.

But speak gingerly when it comes to what motivates street violence, and what happens when it acquires a life of its own.

Sides and outcomes notwithstanding, urban warfare is its own rabid animal, a snarling creature that disgusts and arouses 21st-century voyeurs paradoxically convinced physical fury belongs to an unenlightened past while still mesmerized by the way mass violence picks at its own scabs, presenting a pornography whose bonfires all will publicly disdain but some find hugely arousing, and always will.