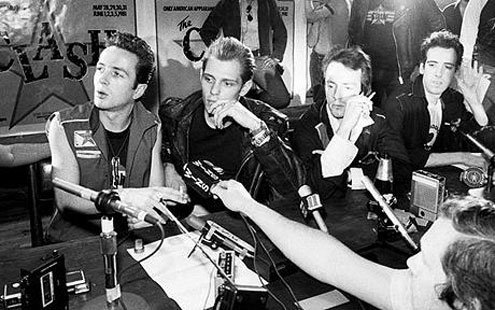 The Clash: Should I Stay or Should I Go?
I

f I had to compile a soundtrack to go with my motherly state of mind these days it would have a heavy punk-rock influence — which is weird because I’m more of a Beastie Boys, Broadway tunes, and (occasionally) soft-rock kind of girl.

The first track might be The Ramones’ “I Wanna Be Sedated.” Thus illustrating my quasi-constant quest for REM (sleep, not the band).

Now that my family is back in Rome (post-summer) and Yankee-themed jet lag is melting away, there’s one single that keeps going ’round and ’round (and ’round) on the turntables of my mind.

It’s The Clash’s “Should I stay or Should I Go?”

Forget Hamlet. That is the question.

Generations of punk-rockers have asked themselves: Sex Pistols or Dead Kennedys? Hip-hoppers still ponder: Biggie or Tupac? I ask myself: Italy or America?

While I enjoy trips to the motherland, they do a number on my mental state. Yes, of course, I like my life here in the land of pasta, but after spending some QT in the US of A I do bang my head against the wall while pondering what’s really best for my boys.

Though I try to apply critical thinking to all my decision-making, it’s hard to make a list of pros and cons when I can’t think straight. So maybe a grading system is in order.

The land that created modern democracy and the Coliseum is the same country that has recently brought us Silvio Berlusconi and postwar architecture that makes my eyeballs bleed. The country does get a point for food. Hands down. But that point is immediately subtrated since Italy hosts the Roman Catholic Church and the Vatican.

Oh, what to do. Both these places have amazing qualities — Italy: Renaissance art, coastline; America: Apple computers, optimism. Still, this is a tough one.

Maybe what I really need to do is swing by the Chelsea Hotel and ask the spirit of Sid Vicious for some advice. Or maybe ask myself more maternal questions, as in: Where can my son with learning and speech disabilities get a better education?

Will my kids lose their bilingual status and become chubby slugs if we move to Suburbia, USA? Will my boys have opportunities in Italy based on their own merits? Will they learn to respect women in a country where scantily clad “dancers” gyrate every night on quiz shows?

Or the biggest one of all: Where will they be the happiest?

My older son adores everything American. When we left, he sobbed for hours wanting more yellow cabs, beach time, and his cousins. Several times a day he asks me, “When will we go back?” My younger son is more European (I think he’ll eventually carry a man-purse). He squealed in delight when the white taxi rolled up to our building. Same mother, two boys, two country preferences.

I’m haunted by the idea of choosing for them. But I also know that not everyone has the luxury and privilege of choice. Maybe I should try to see things through their small eyes. Maybe I need to relax and just let them eventually decide for themselves. Or maybe I just need to get myself to iTunes and buy a new soundtrack for the fall. Maybe a little Barry Manilow, Mary J. Blige and Bjork.