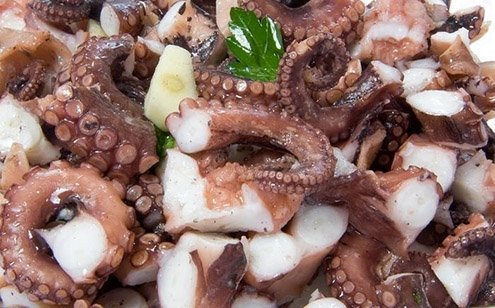 Insalata di polipo (octopus salad) for a 10-year-old? Bring it on.
W

hen a 10-year-old refuses broccoli and feeds exclusively on pizza and hot dogs, no one bats an eye. When my son wants to know the kinds of olives in a particular tapenade, both host and dinner companions go quiet.

This is the child that at age four ate not one but three portions of polpo alla Luciana in a seaside tavern in the Tuscan town of Castiglione della Pescaia (the owner still remembers us and demands to treat my son to the savory stewed octopus dish each time we visit). The same year, at a posh seafood restaurant in northern California, the kid ordered spear-caught grey snapper and steamed asparagus spears. The chef came out and shook my hand.

On a recent business trip, he impressed a seasoned cheese-maker when he tasted ricotta forte — a ricotta that’s been aged five months to the point of becoming pungent and spicy. My son asked for seconds.

My boy is a bizarre alimentary wunderkind, but it’s not all his doing. As a child, I was a picky eater who whined a lot. I didn’t eat tomatoes, fish bones scared me, and I ironically dreaded cheese. I didn’t want him to be like me.

So I encouraged him to try different flavors and foods. I never forced him. Nor did I lazily fall back into the trap of routine meals. He tasted his first fast food “Happy Meal” at age nine and loved it. On nights when I don’t feel like cooking, dinner is popcorn and milkshakes. We’re not food snobs. When we dine out with friends, seeing him experiment with new foods is beautiful. He’s partial to bold flavors and has always loved fish. These are my gourmand son’s top 10 dishes.

They say your palate changes every decade. Who knows what’s next for my son. I raised him as an international kid so you’ll get no resistance if you offer up burgers, French toast and PB&J sandwiches. But that’s another story.