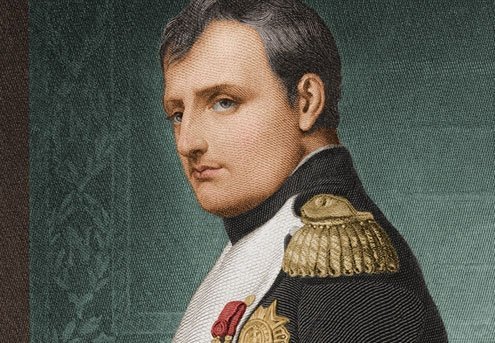 Napoleon in high form: Epaulette is a French word that means "little shoulder" (diminutive from épaule, which means "shoulder").
T

he 19th-century wore epaulettes. They hung from the shoulders of elite military officers like frilly braids. Elevator boys in fashionable European hotels or ocean liners had them attached to make it seem their girlish levering had its own rank (you and your luggage with it).

But officer epaulettes were the ones that mattered. Officers were the sex symbols of their age. There were no sports stars, celebrity singers or reality show stars (unless you count opera heroes as a costumed forerunners). But fetching Aidas and sundry Figaros didn’t get to wear epaulettes — at least not off stage.

My mother loved trimmings. She had something of a crush on Napoleon, an epaulette emissary and an ornament unto himself. The word epaulette is French, a diminutive of épaule, shoulder, and vain Napoleon was among the most ornate French patriot ever — and surely the shortest, though my mother didn’t seem to care. She bought prints of Napoleon and hung them on the wall of my room hoping maybe I might absorb his sense of outer grandeur or perhaps mimic the sundry generals and admirals whose company he kept, all of them made cumbersome but grand by their many layers of shoulder stitching. Though I once befriended an elevator boy on a French ocean liner, I learned no fashion sense, only sarcasm.

I did once find a pair of fancy epaulettes at a Spanish flea market in 1962, along with a World War II German helmet, and carefully placed the epaulettes on each side of the helmet on a small table, as to make the table into a Pinocchio command center, helmet and uniform at the ready. Nothing ever moved.

My mother’s love of Napoleon, along with visits to flea markets and a room in need of filling up, allowed epaulettes to make a fairly regular appearance in my life, which can happen if you’re a loner and believe that things placed in close enough proximity are destined to do your bidding, animated only by your own imagination. You lavish the inanimate with so much praise it eventually finds your coaxing irresistible.

I remember the moment of intellect awareness, which occurred while I was busy envying high school football players and the attention they got from girls. Looking more closely at their helmets and shoulder pads, history suddenly leveled out. These were the military officers of my day, now that war itself was no longer fashionable. These were the generals of my moment, pads and helmets in the spirit of Napoleon’s masculine embroidering.

Whether it was fancy garb, big reptiles or robot monsters, humans — who began as small boys (and girls) — would inevitably become slaves to whatever craving young minds made outsized, elaborate, important; even trifles could feel necessary.

After this moment of illumination I settled back into my dream state, in which I’ve remained ever since. I once came up with a gravitational theory regarding epaulettes — or maybe it was just a physical theory. I didn’t know the difference. I saw them as shoulder rudders. Big and bristling and curved, they’d help the generals and the admirals maintain their balance while walking or giving orders (not necessary Napoleon, since he was so short and therefore lower to the ground). They were the wings men sought to sprout but couldn’t, leaving them with these man-made furnishings, and as a result, the adoration of authority-struck commoners who weren’t accustomed to such a wildly adorned humans. The epaulettes of some admirals (I calculated from my books) must have protruded a full foot in either direction. If such a revered man ever fell he’d probably fall hard. I reckoned that a fully adorned admiral, if ever shot in battle, might weigh enough to shatter the wooden planking and make a hole in the hull. I wondered if a falling admiral had ever sunk his own ship.

So, if you have any questions about epaulettes, ask me. Don’t look it up. Don’t roll your eyes. Try daydreaming instead. After that I’ll take you to my room where I still have a print of Napoleon that my mother once bought. In it, he broods in small room, hands behind his back. His uniform is modest. He looks wistful, as if he he’d miscalculated, as if perhaps he never had a chance, as if mobile phone service on St. Helena was disheartening. But that’s another story.