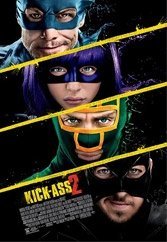 It wasn’t too becoming to enjoy a little girl slashing up bad guys and spurting out the “C-” word in Kick Ass (2010). Nor was it particularly smart to empathize with spotty high schoolers mimicking their comic book heroes. Did the concept reek with stupidity? Yes. Did we love it anyway? Yes again.

In the original, director Matthew Vaughn fished out the indulgent throbs most adults left behind at puberty with an embrace of juvenile fantasy. It was a glorious salute to pop trash.

But the sequel wanders slightly off course. A few years on from the valiant adventures of Kick Ass (Aaron Taylor-Johnson), a new wave of masked vigilantes have spread across New York to fight bad guys. When rich kid Chris D’Amico (Red Mist in the original) reinvents himself as super-villain “The Motherf*cker,” he hires a posse of bulletproof lackeys to wipe out the new Justice Team. Hit Girl (Chloö Grace-Moretz) has the savagery to save the day, but the 15-year-old’s personal life will force her to hang up her wig.

The unrivaled joy of this series is action. Necks are snapped, arms are severed, and blood is sprayed around like a taboo-splashed B-Movie. The 8-bit chimes from the GameBoy era make the violence pop with devilish indecency. Even the lewd but campy mismatches are bizarrely enthralling. Grace-Moretz stands out as the purple-plaid warrior who slashes her way into nerd lore.

But for all the pulsating violence, a lingering subtext bogs down the merriment. Writer-director Jeff Wadlow seems intent on giving the sequel sermonizing punch: since society compels us all to wear masks of a sort, how then to distinguish good from bad? While there’s no harm in a giving the franchise a little heart, what makes this particular concept so brilliant is all the bone-bashing. No. 2 dispenses with some of the foolhardy and adds restraint, which is a shame. Next time, let’s please get back to the decadent inhumanity in us all.