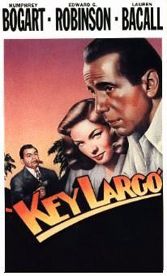 Good guys and bad are then hemmed in by a hurricane and director John Huston manufactures enough claustrophobia to last a week. The war-weary McCloud doesn’t want a fight, but Rocco’s arrogance recharges his righteousness. So do Nora’s looks. Nora and McCloud are resigned to the period’s honor-first mantra: “Your head says one thing, your whole life says another. Your head always loses.” In effect, you do what you must.