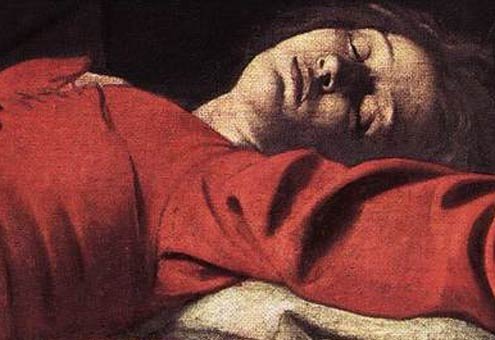 n Sept. 24, 1600, Monsignor Tiberio Cerasi, Pope Clement VIII’s treasurer-general, commissioned Michelangelo Merisi da Caravaggio, known as Caravaggio, to paint “two pictures on cypress wood” for his private chapel in Rome’s church of Santa Maria del Popolo. Each painting, read the commission, should be the “length of ten Roman palmi and a width of eight” with one representing the Conversion of St. Paul and the other the martyrdom of Saint Peter. They could include “all figures, persons, and ornaments which seem fit to the painter,” with delivery demanded within eight months, or May 24, 1601.

But what “seemed fit” to Caravaggio apparently didn’t fly with Cerasi. At least not according to Caravaggio’s contemporary and rival, the artist and art historian Giuseppe Baglione. “These paintings,” he recalled in 1642, “had first been worked by him in a different manner, but … they did not please the patron.”

The rejection of his religious art was a major undercurrent in the short, turbulent life of Caravaggio, the bad boy of the Baroque whose paintings, remarkable for their haunting realism and unprecedented use of so-called tenebrism (an amplified chiaroscuro), inspired generations of artists to come, including Rubens, La Tour, Velázquez, and Rembrandt.

Caravaggio’s sensational 1599 “Saint Matthew” paintings in Rome’s Contarelli Chapel (including “The Calling of St. Matthew”) catapulted him to instant fame, leading to a string of religious commissions that would come to symbolize the might of the Roman Catholic Church during the tense and crucial Counter-Reformation period.

But Caravaggio, hailed as a “distinguished painter of Rome” (Egregius in Urbe Pictor) in his Cerasi contract, was also an irascible deviant with a dark side. The scrappy orphan from Lombardy indulged his unseemly living and penchant for violent brawls in the mean streets of Rome, where he became intimately acquainted with the underbelly of society.

Caravaggio littered his canvases with images and people drawn directly from the shadowy fringes of his life. It was this inclination that got him in trouble with the Vatican. His religious art dispensed with traditional iconography of the divine, instead delivering martyrdoms and mysteries that contained flagrant realism.

“The Crucifixion” and “The Martyrdom,” commissioned on the heels of Caravaggio’s “Saint Matthew” success, began his troubles with the Church. (In 1602, “Saint Matthew and The Angel,” a third painting for the Contarelli Chapel, was rejected for depicting the saint as a rather sturdy peasant).

Responding to the rejection, Caravaggio swiftly completed a new set of paintings, which are now in the Cerasi chapel. But why Cerasi nixed the originals, if in fact he did so, remains unclear. Problems with the poplar wood and the narrowness of the Carlo Maderno-designed chapel have been suggested, as well as the murky theory that the paintings were dubiously snatched up by a Cardinal Giacomo Sannessio, who took advantage of Cerasi’s sudden death to beef up his private collection. Whatever the answer, it is positively tame compared to the seedier details of Caravaggio’s most scandalous rejections.

The “Madonna dei Palfrenieri” (1605), the first and last Caravaggio painting commissioned for Saint Peter’s, was removed from the altar of the Grooms’ Confraternity after just two days. The tableau features a withered St. Anne gazing on as an uncircumcised Christ and a top-heavy Virgin crush a serpent, a symbol of original sin, beneath their bare feet. It was a total breech of Church decorum, “for in it,” writes the 17th century artists’ biographer Gian Pietro Bellori, “the Virgin and Jesus as a nude boy were portrayed ignobly.”

It was kerosene on the Catholic-Protestant fire. Roman Catholics believed that the Virgin had stamped out original sin, while Protestants argued that this feat belonged to Christ. “In this painting,” wrote one cardinal’s troubled secretary, “there are but vulgarity, sacrilege, impiousness and disgust.”

The Discalced Carmelites of Rome’s church of Santa Maria della Scala wasted no time refusing the masterpiece “The Death of the Virgin” (1606), also complaining of failed decorum. Caravaggio’s Virgin, a listless corpse with a swollen belly and nude legs accentuated by a shocking red dress, inspired no end of outrage, including the widely circulated rumor that his model was a dead prostitute fished from the Tiber River.

The moving, physical, human image of death was lost on Caravaggio’s contemporaries, who fixated on the dead hooker theory. “He had too closely imitated the bloated body of a dead woman,” wrote Bellori, who was no fan of Caravaggio.

Ultimately, Caravaggio’s realism proved a blessing and a curse.

By humanizing the sacred, his paintings relentlessly pushed the Church’s buttons and boundaries. That, ironically, is why they resonated so deeply among the 17th century churchgoing audience that the Counter-Reformation sought to woo. “Caravaggio won the acclaim of the mob, the lowlifes who knew nothing about art,” wrote The Guardian‘s Jonathan Jones. “The Counter Reformation wanted to reach the people. Caravaggio made art that touched the humblest soul.”

“The Death of the Virgin” was Caravaggio’s final Roman painting. In 1606, just after its completion, he was convicted of murdering his opponent after a tennis match went sour. Forced into exile from Rome, he spent his final years making masterpieces and enemies across Malta and southern Italy. In July of 1610, on his way from Naples to Rome to obtain a papal pardon for his crime, Caravaggio, just 39, died alone on a beach in Tuscany.

Murder, malaria, syphilis, and lead poisoning have all been suspected, but his death, like so many details regarding the fate of his paintings, remains shrouded in mystery.