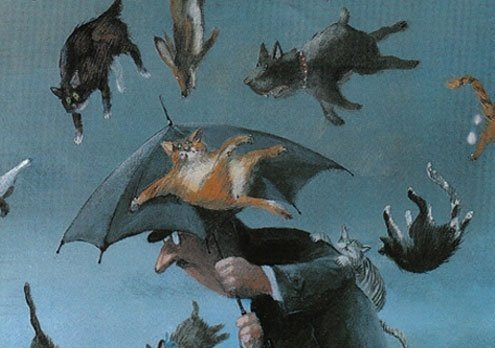 Burt or Snort or Yurt made the announcement that would change my life.
B

orn into French, the first menace posed by the English language came in the form of the impending wet animal apocalypse. We’d barely arrived in America — I was six — and we lived in a place called Georgetown, where the houses were made from pasty red bricks. Near them roamed huge beasts, including cats and dogs.

No such animal life in Paris, or none that I remembered. The only barking I’d heard there came from my father, the only hissing from my mother, the only foraging carried out by maids who intruded into my world to make me do impossible things like wash and dress. Worse still, my new country also hosted leaping furry arches that wandered around rudely, apparently uninterested in what anyone thought of them. Grey and black, these were called squirrels, a word I attempted and failed to pronounce, instead attempting to scare away these terrible alien creatures when they entered our back yard.

At school, I had been curtly introduced into English (“hello!”), given a phrase book with grinning faces and a few books I was told to color in. I was to form green and blue word in English only, “thank you,” “please,” “today.” The book lay untouched. This displeased my American father who had an inexplicable fondness for the English language, which he attempted to share. “That is an air-O-plane,” he would say, sincerely pointing at the moving sky. I saw only clouds and snorted.

My more tolerant mother, born in Warsaw but raised in France, pressed ahead with efforts to convert herself, and me, to the new language. She pointed to a newspaper photo of the American president and told me he lived in a white house. Unwilling to capitulate, I produced one of two responses, invariably in French, “no he doesn’t, it’s green,” or “why?” My parents would either sigh or ignore me, mostly the latter.

None of this prepared me for the day of the thunderstorm.

It arrived, as thunderstorms apparently did in strange countries, with haste and brawn. The air-O-plane sky bruised quickly. The squirrels sought shelter. Gobs of early rain began to fall, scattering all the creatures on the block. The wind howled. People — we had neighbors, another new and remarkable invention — briefly emerged from their homes to examine the state of the world and take measures.

At the time, I was on the porch with a green crayon, my favorite small sword against squirrels or white houses. My mother was out, my father at work, a neighbor, a woman named Alpha or Salsa or Alice, scurried inside and out behaving like her own emergency.

When Alpha or Salsa or Alice reappeared on the porch she brought with her a man name Burt or Snort or Yurt. Together, their hair become like wind, they made a great commotion with doors.

This is when Snort or Yurt or Burt made the announcement that would change my life. “You better take him in, and the book too,” he told Alpha or Salsa or Alice. “Out here it’s about to rain cats and dogs.”

This is when the rain gobs were met with my own kind, shed in abundance. Here I was, essentially alone with my green crayon, a stranger in a land with white houses and squirrels, and I was facing the English-language apocalypse in the form of cats and dogs falling in heaps from the sky. Inside, placed behind the window pain, I started sobbing and didn’t stop. Alpha or Salsa or Alice attempted to comfort me, followed by Snort or Yurt or Burt, but I closed my eyes and kept them closed, especially when the loud sky-bangs began.

“What’s wrong with him?” I heard Snort or Yurt or Burt ask Alpha or Salsa or Alice. The two of them descended over me, prying me loose from my green crayon and insisting that I open my eyes. But I wouldn’t. Let the dogs fall; let the cats fall, too; let the squirrels follow. But I wouldn’t play witness.

When the storm got to its loudest noises, Snort or Yurt or Burt confirmed my worst fears: “Now it really is raining cats and dogs!”

This, I thought, was where my parents had brought me, perhaps as punishment, to this strange America of loose and falling animals. I hid behind the armchair, kept my eyes closed for minutes, then for bunches of minutes, until the noise subsided. My mother came home and I heard Alpha or Salsa or Alice tell her that I had become strange and afraid during the storm.

Soaking wet, my mother found me near the chair, covered my face and eyes with her damp hands, and spoke to me gently to me in French. Which is when, finally peeking out over the window ledge and into the rainy street, I finally uttered my first public (and verb-less) English sentence: “Where the animals?”

But Alpha or Salsa or Alice and my mother just smiled.

I have long wondered how the English-speakers made so many cats and dogs vanish so quickly after their raining, but I’ve since learned that Americans are a resourceful people.