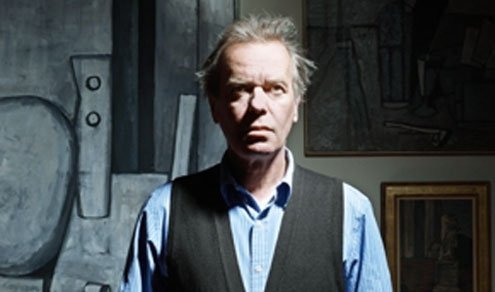 French and German publishers have so far shied away from translating Martin Amis's descent into the Auschwitz abyss.
M

artin Amis’s latest novel, “The Zone of Interest” (Jonathan Cape: London, 2014), is a brilliant time-capsule look at imaginary World War II extermination camp Kat Zet; read “Auschwitz.” Six main chapters and linking episodes fictionalize actual events in that Nazi lager from 1942 to 1945. Narrating its grisly horrors are three voices different both in character and their role in the camp’s hierarchy.

These voices often go to extremes, with exaggeration and grotesque satire playing major roles in the story. But the satire in “Zone” is no comedy. Instead, Amis is out to savage Auschwitz, and the Holocaust with it.

The opening chapter heading repeats the novel’s title, since these early pages are less scene-setters than a reader compass. Is is here that Amis subtly but surely establishes all coordinates for the novel’s developing characters, revelations, and events.

The lead speaker is Sturmbannfürher (major) Angelus (“Golo”) Thomsen. He’s the camp’s desk-liaison to Berlin and the fictional nephew of Martin Boorman, Hitler’s private secretary. In each chapter, Thomsen’s voice precedes that of ranting, doltish camp Kommandant Paul Doll, which eventually opens to that of terrified prisoner-assassin Szmul.

In accordance with Nazi management edicts, Thomsen is Doll’s foreman. That galls the Kommandant, though he’s not sure why. Though Thomsen appears to the follow party line, he’s in fact a more complex and thoughtful figure, and, finally, a saboteur.

In the novel’s first episode, Thomsen’s “zone of interest” is Doll’s wife Hannah — “Something happened at first sight… it was like love.” Thomsen is smitten by this ethereal vision but his suggestive overtures are rebuked. So he moves on from his Hannah-dreams to a sex-for-favors relationship with historically infamous Auschwitz guard Ilse Grese (known as “the beautiful beast” and executed for war crimes in 1945). His carnal liaisons with Ilse seem like an unpromising start for Thomsen as protagonist. But give him time. Romantic and idealistic, he’ll sabotage Nazi plans and push forward one of the novel’s key threads: love desired, even in the Holocaust.

Episode two presents the first hints of Thomsen’s evolution, as unwittingly narrated by the raging Kommandant Doll. When Hannah Doll begins to understand camp realities, she refuses sex with her husband. Doll’s frustration is made worse by Berlin’s demands. The two are Doll’s “zone of interest.”

Camp Nazis have a talent for chilling and bizarre euphemisms. To welcome his squealing, train-packed “detainees,” Doll provides violin serenades and promises of craft schools and agricultural work. All the while he worries whether the cremation furnaces and gas showers will be sufficient to eliminate the usual huge percentage of the “unfit.”

As for Thomsen, he must reckon with conglomerate IG Farben, whose business-suit representatives are in the plant attempting to recruit as many detainee-workers as possible to help with the German war effort. Farben wants to build its own camp and introduce food allotments to make believe the inmates are part of a free labor system.

This annoys Thomsen. He’s against Farben’s idea to extend lives to make for better workers. “That’s not Berlin’s political objective,” he says, a view that Doll seconds: “No mollycoddling.”

It’s off to the ovens.

In the third episode, we meet haunted prisoner Szmul. He heads the gruesome human-debris disposal squad. He also decides who lives and who dies. Ready to work? If not…

Yet Szmul is one of Amis’s most touching figures, a conscience-stricken conscripted prisoner. Assigned to oversee mass deaths in return for his own tenuous survival, he’s the “Sondercommandoführer,” or special unit chief, a cruelly deceptive title. He’s part of what Amis calls “my German garnish,” a phrase he uses to underline the Nazi’s grossly conflated, and blind belief in their “mission.” “Commander” Szmul remains a starving man in a prisoner’s uniform who orders deaths but risks his own at any time. Not by chance, it’s Szmul who recites a fable about a king whose wizard created a magic mirror that showed “who you really are,” your soul. But the king couldn’t look into the mirror without turning away. Nor could anyone. For Szmul, Kat Zet as seen in that mirror is the real “zone of interest.”

As camp “visitors” grow, Kat Zet expands to included Kat Zet II and III. Two-storey-high pyres of bodies back up overtaxed incinerators. Flames are visible for miles around. The stench putrefies the air in nearby towns. Byproducts from the pyres turn the snow-covered ground brown.

It is in this genocidal crucible that Thomsen’s role as a protagonist is forged. He cannot shake his love for Hannah, who loathes the camp (“When the future looks back on the National Socialists, it will find them as exotic and improbable as the prehistoric meat-eaters,” he writes her in a letter). Increasingly disenchanted, he sabotages German industrial profit from the camp through deft maneuvering. Thomsen also narrates the novel’s epilogue, “Aftermath,” set in 1948, when, after long search, he locates widowed Hannah. “It’s a fool’s errand,” he says of his search. But love’s role in fiction is often impossibly possible.

With extraordinary nuance, Amis creates three wildly different Holocaust perpetrators and gives each a dramatically powerful voice. Readers are forced to look into the realm’s magic mirror, with Amis asking them to imagine the unimaginable.