Kafka on the Shore 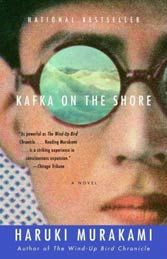 The key to this novel, if a key there is, is an early line: “Sometimes fate is like a small sandstorm that keeps changing direction.”

At 15, Murakami’s fictional youth Kafka is spoken to by a Boy Named Crow — conscience? ghost? you decide — and runs away from his father. Since his father makes flutes from the souls of dead cats the escape isn’t entirely unwarranted.

Kafka ends up on the island of Shikoku, where he befriends a friendly cross-gender librarian and a museum owner, Mrs. Saeki, who exists out of time (Kafka falls for her, but is her younger self really his mother?) Oh, there’s also the matter of the alleged UFO that erased the memory of a group of Shikoku schoolchildren following the war.

Murakami is so completely absorbed in his rich strands, including patricide, that he rarely considers whether they constitute a convincing narrative whole. They don’t. There are erudite truck drivers and Hegel-wise teen girls, but they’re all part of the same swirl (which includes a cameo by Colonel Sanders). Why does a sandstorm change directions, asks Crow? “Because the storm is you.” But so much stand is blinding.

The wonderful Jay Rubin yields translation duties to Philip Gabriel, and Murakami’s penchant for jargon can cause him fits.