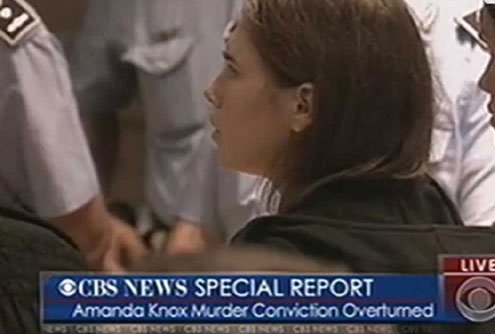 The lack of DNA evidence overturned Amanda Knox's conviction.
I

mbedded deep in the culture of the Spanish province of Andalusia is the notion of duende. It informs much of the writings and lectures of the Spanish poet Federico Garcia Lorca. In the preface to the compilation “In Search of Duende,” Lorca scholar Christopher Maurer describes duende as encompassing feelings of “…irrationality, earthiness, a heightened awareness of death and a dash of the diabolical.” Lorca applied them to those moments when a performer has the “…inexplicable power of attraction, the ability on rare occasions, to send waves of emotion through those watching and listening to them.”

While these compelling sensations are created by the magnetism between an individual performer and his or her audience, the Amanda Knox murder trial appeared to apply them to the trial itself. The cast of characters, the setting, the clash of cultures and the media frenzy all conspired to create drama that continues to hold those following the affair in its thrall. These spellbound followers are uninhibitedly sure of Knox’s certain guilt or innocence.

In a murder trial, however, emotion must be cast aside in favor of a cold look at the prosecution’s evidence. Under Italian law, as with each U.S. state, clearly defined elements of the crime must be proven by the prosecution and done so at the high bar of “beyond a reasonable doubt.” Otherwise the defendant is acquitted.

The Meredith Kercher murder is a cautionary tale of the prosecution not meeting its burden of proof. In this case we have a murder victim and we know the murder weapon was a knife. These are the objective facts. Beyond these there is only uncertain forensic evidence.

In Italy, the issues that must be proven beyond reasonable doubt in a murder trial are who caused the death, coupled with a “general” intent to carry out the act that caused the death. In the Kercher case it means that the killer used the knife to cause the wounds, not necessarily with the intent to kill. In practice, the operative questions are therefore “who” did the “causing,” and with what “intent”.

In the 2009 trial, the eight-person jury (two judges and six laypersons) convicted Knox by majority vote, believing that the prosecution proved beyond a reasonable doubt that she was present at the time of the murder, that she committed or assisted in the stabbing, and that she had the motive and intent to do so.

The appeals court, which in Italy can rehear a case on its merits, either in total or in part, used information obtained from independent DNA experts to determine that there was no reliable evidence proving Knox was present at the scene of the crime, let alone that she intentionally wounded Kercher.

By failing to identify Knox as the “who” at the scene of the crime, the rest of the prosecution’s case fell apart like a house of cards. Knox was acquitted and released.

In Italy there are several ways that a judge can render a not-guilty verdict. Two are applicable in this case: “not guilty for insufficient evidence” and “not guilty because the defendant did not commit the crime.” Knox was acquitted because the appeals court held that she did not commit the crime, and is therefore innocent, as that is the rightful default in Italy, as it is in the United States, when the prosecution fails to prove guilt beyond a reasonable doubt.

How would this have played out had the murder occurred in a U.S. college town? According to many Knox supporters, the matter wouldn’t have gotten further than initial DNA investigation. Moreover, her personal profile and behavior would have been viewed with far less negative fervor than it was in Italy. If true, these two considerations taken together would have reduced the likelihood of charges even being filed.

But had there been a conviction at the trial level in the U.S., the road to freedom would have been a much tougher climb than in Italy. In U.S. state courts, appeal judges do not decide questions of guilt or innocence. They do not rehear evidence and they do not second-guess the trial court jury.

The focus there instead is on whether the trial was fairly conducted, whether the trial court judge made any errors of law (gave erroneous jury instructions, for example), and whether the evidence supported the ruling. An appeals court can remand for a new trial, but the decision is discretionary.

In the end, on the matter of guilt or innocence, the Italian criminal justice system as designed proved successful. Recognizing the possibility of human error, it provides for a rehearing, a second trial. Disputed facts in a case can be evidenced and heard at an appeals court level. That was Amanda Knox’s saving grace.

The Italian Court of Appeal openly sought new and independent expert analysis of the prosecution’s original DNA evidence. Without that basic appellate initiative, Knox might still be in prison.

Would passion about the murder and the trial taken on the same dimension in the United States? Likely not, but it doesn’t matter. What does is the awareness that a murder trial is no show and it all comes down to the facts.