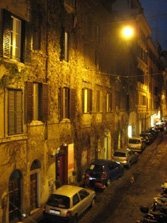 Via Urbana by night.
N

ot too far from where I live is a new watering hole known only by its street number. When it opened accompanied by discreet fanfare a couple of months back I didn’t expect much. For ages I’d heard the requisite cacophony of bang, clank, bzzzzip, crash (“Andrea prendami un trapano!) What little progress was measurable only in puffs of dust that filtered out into the sunlight as workmen hauled brown paper bags, broken tiles and cement chunks to a growing hill of debris outside the cantiere’s door. The work dragged on long enough for me to wonder if they were digging to China.

This led me to play a silent guessing game: Would it be yet another flash-in-the pan souvenir shop (with snow globe coliseums and €11 Venetian glass pens made in Prague), an ultra-chic art gallery (popular in my neighborhood), or another quirky vintage clothing boutique displaying gently-used clothing that fashionistas find all the rage.

I was wrong on all counts.

It was a restaurant and wine bar that served only organic, locally-produced foods and showcased the regional wines of Lazio. Outside Rome, Lazio shrugged off as a producer of quality wines. That’s a mistake. Several indigenous varieties cry for attention.

Which is where my new “friend” comes in. With a gorgeous glassed-in kitchen, friendly staff, and a chef that prepares his piatti as if they were being garnished for a Gambero Rosso photo shoot, my place seemed to woo me. I learned its name, Urbana 47, and that of the creative chef, Riccardo Rauss.

Bottles ranging in price from €10 to €35 rise from retro aluminum shelving in soldierly rows. Scattered among old cobbler benches are cans of organic tomatoes and metal tables. The feel is Old World mercantile meets New York chic brasserie. Grooving along to Paolo Conte, it didn’t take long before it became my haunt, particularly when life dealt me more lemons than I’d ever need for limoncello. Or when I had too much work and too little time to share with those I love (and only a few centesimi to pop for pricey bottles).

It’s the kind of place where early in the day you can sit and read Italo Calvino or have a cup of joe while catching up on the days news. In the evening, there’s a welcoming corner nook with a comfortable couch and overstuffed leather chairs. Customers gather for aperitivi or nightcaps.

Stopping in after a solid 24-hour stint spent grant-writing, my hair stringy hair, my make-up a myth, and nearly walking on my eyelashes with exhaustion, I sat in worn Levi jeans sipping Kottabos, thankful to not hear the soft clitter-clack of keyboard tapping. Thumbing through a oversized coffee table book on the wines and cheese of Italy, I heard the owner fussing with a waitress named Angela. “Come on! It won’t take that long,” he told her, to which Angela responded: “Can’t you see we have a customer, I can’t leave.”

Motorino helmet in one hand, keys dangling from his index finger, he turned to the side room and saw me in the safety of my self-created wine sanctuary. I wondered if I was about to be booted. But no.

“It’s just Lynda,” he told Angela, “we can just lock her in and leave her the keys!”

It seems I’ve been adopted.

Casale Cento Corvi-Kottabos 2004 From Tuscia, this red is named after an Etruscan party game where the lees of the wine are flung from a cup towards a target. Wine darts! A Latium I.G.T., it’s 60 percent Sangiovese, 40 percent Merlot. It’s multilayered with dark fruit and pepper highlighted by a long finish. Fermented in steel and aged briefly in barrique, you can easily taste the grapes used in blending and not merely the oak used during aging.

Sant’Andrea-Riflessi A Circeo D.O.C. Rosso that’s 100 percent Merlot from Terracina. This is easy-drinking, medium-bodied and inexpensive — structured like a young Washington state merlot. Nice price and layers of concentrated ripe berries and plum, with subtle hints of mocha and spice.