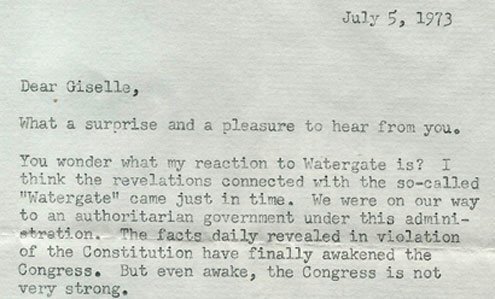 A terse, no-nonsense writer
I

n 1950, New Jersey-born American Democratic Party politician Helen Gahagan Douglas ran for the United States Senate in California. She had already served three terms as a popular House Democrat, making a name for herself as activist on behalf of women’s rights, civil liberties and world disarmament. The latter was a delicate subject in an immediate postwar period that saw the Unite States and the Soviet Union locked in a bitter war of ideological words. Her activism would eventually undermine her.

A graduate of Barnard College in New York City, Douglas first sought fame as an Hollywood actress. Though then-Helen Gahagan made only one Hollywood film, “She” in 1935, she had already married one of the generation’s brightest male stars, Melvyn Douglas. Both were ardent anti-Fascists and in the 1930s campaigned against European anti-Semitism. But the marriage was typical of celebrity unions, all the more so when Helen Douglas headed to Washington in 1940 to begin her congressional duties. There, she conducted an affair with a fellow congressman, Texan Lyndon Johnson (though the affair was well-known, the mostly male press then kept such matters under wraps).

In the 1950 California race, Douglas was pitted against Republican Richard Nixon in what would prove a precursor to character assassination campaigning, now a commonplace. Nixon, an avowed anti-Communist, took aim at Douglas leftist sympathies, based mostly on her opposition to the creation of the House Un-American Activities Committee, established in 1938 to root out Communist sympathizers in the U.S.

Nixon accused Douglas of being soft on communism. With the Korean War as a backdrop — American troops fighting Communist North Korea and later Red China — he produced a so-called “Pink Sheet” intended to portray Douglas’ House voting record as pro-Communist. Douglas, Nixon said during the campaign, was “pink right down to her underwear.” Defenseless before the onslaught, Douglas lost to Nixon in a landslide in a loss that also torpedoed her political career. Few listened to her portrayals of Nixon as an amoral politician and relentless opportunist (she called him “Tricky Dick,” a nickname that would resurface later).

Tarred by the campaign damage and unable to find work in the Truman Administration, Douglas returned to acting. She later campaigned for Massachusetts Sen. John F. Kennedy when he sought the presidency against Nixon in 1960. Douglas, who remained married to Melvyn Douglas until her death in 1980, never changed her view of Nixon, even when he rose to the vice presidency and later, in 1968, to the presidency itself. After her death, serving California Sen. Alan Cranston eulogized her on the Senate floors as one “the grandest, most eloquent, deepest thinking people we have ever had in American politics.”

She was also terse, no-nonsense writer, as this personal note shows. It was written during the early stages of the Watergate scandal, but nonetheless more than a year before Nixon accepted his role in the cover-up resigned the presidency.

What a surprise and a pleasure to hear from you.

You wonder what my reaction to Watergate is? I think the revelations connected with the so-called “Watergate” came just in time. We were on our way to an authoritarian government under this [Nixon] administration. The facts daily revealed in violation of the Constitution have finally awakened the Congress. But even awake, the Congress is not very strong.