Just in from Mars 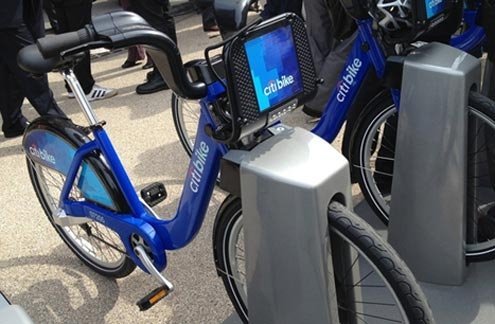 What's a bike without sponsorship?
N

ew Yorkers love a good controversy and now we have new one, just in time for summer. It’s not about the usual oversized sugary drinks, trans fats or cigarette tax. Its object is far more humble and benign.

You guessed it (or maybe you didn’t): the human-powered bicycle.

I never thought that two-wheeled contraptions around since 1885 could cause such a 21st-century commotion, but that’s what they’re doing.

On Memorial Day, 6,000 rental bikes will appear in nearly 330 stations in lower Manhattan and Brooklyn and it has caused uproar. It’s part of a city-sponsored bike-share program that will let you pick up a bike at any of these stations if you pay an annual fee of $95.

Across from my building, an empty rack arrived two weeks ago. Built of solid silver metal, emblazoned with Citibank logos and cycling maps, it touched down on my street like a space invader. My neighbor and I stumbled upon it at our street corner and we stopped in our tracks. Cocking our head like a lizard on Animal Planet, we took in the curious contraption.

Then my neighbor’s verdict, “What the hell is this? It’s taking up five free parking spots on our street!” She was livid.

A crowd gathered and a cacophony of voices piped in.

“Did you know about this? I had no idea!” said one.

“There was nothing about this on the neighborhood blog? Did anyone hear from our councilwoman?” another asked. “Anyone who wants to ride a bike already has one. This will only bring tourist to our neighborhood. We don’t want them! And sponsored by Citibank? Oh please!”

The poor empty rack didn’t hold a single bike yet, but the democratic voices were already rising up in disdain.

My feelings were complicated. I love bicycles.

Pedaling fuels some of my favorite life memories.

In Rome, I recall the ease of traversing the Villa Borghese on wheels, gliding in circles around the statues and fountains, feeling small and childlike beneath the towering groves of pines.

On a brisk Sunday morning in Berlin, I rode from Alexanderplatz to the Landwehr Canal. I crisscrossed from side to side until I was awestruck by a bevy of swans and their new chicks.

Even cycling the Manhattan Bridge is a thrill, the rising arch steeper than the Brooklyn. The expanse of the city appears at the apex before coasting effortlessly into the markets of Chinatown.

Though all of this was true, somehow I shared my neighbor’s dismay. Was it that the city has enough chaos? With wild-bull taxis, city and school buses, delivery and mail trucks, and countless pedestrians crossing streets at random, do we really need to add 6,000 bicyclists to the mix?

As one neighbor exclaimed, “This might work in Paris, but we don’t live in Paris. This is New York!”

Finally, the cluster of voices, including my own made me smile because in fact, the bicycles will find their way into this maddening city. Just like the Italian and Irish immigrants in the early 1900s the Latinos that stream in from the South, and the 40 million tourists that visit every year.

Somehow we New Yorkers make it work. We just like to shout about it first.