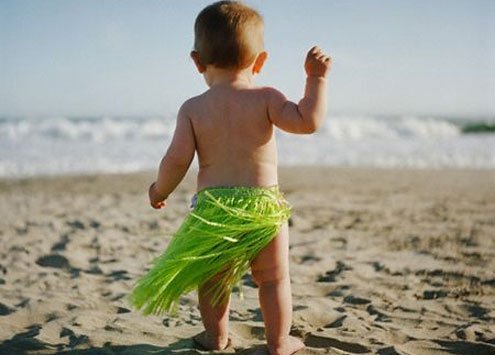 uring the summer, me and my men — my husband and two sons — are known to frolic in America’s eastern waters: the Chesapeake Bay, the Severn River, the Atlantic Ocean.

But this summer would be different. This summer I decided that we’d take a break and relax in a sleepy seaside village along the Mediterranean.

Note: break, relax and sleepy. If this were a literary exercise these would be glaring examples of ironic foreshadowing.

I found a picturesque palazzo for rent. The owners were sweet and ancient, boasting a total of 181 years between them. The 87-year-old wife showed me around gardens where grapes, pears and peaches grew among rose bushes, wisteria vines and pine trees. In front of the house was a brand new park, and behind it the sea. It was perfect for us. When I explained that we needed to stay close to Rome because of my older son’s therapy, her eyes turned watery and she said, “I love children! I always wanted grandchildren but my daughters never had any.” “Not to fear,” I repled, “you will now have four.”

My girlfriend and I (mother of two) wired the deposit, packed our bags and moved in. That was four weeks ago. Now the old lady is crying about kids for an entirely different reason.

Upon arrival in Paradise, each kid went nuts. No one slept. No one ate. No one wanted to share the toys. Everyone cried for their fathers — including my girlfriend and I. Which is really strange because her dad is dead. We were all insane.

When I explained this scenario to several Italians — none of whom I consider to be idiots — and each one said, “Of course, the sea agitates children.”

“It’s the iodine,” they continued. “It makes everyone crazy the first week… but after a month it has great medicinal qualities.” One person went so far as to insist that “mentally ill” people should stay away from the sea. I wondered why no one saw had seen fit to say this to me — the lady with the kid who has neurological problems — before I laid down cash and conjured up fantasies of laying on white, sandy beaches.

Now, I don’t completely believe the iodine thing. Just as I don’t think that ice or air conditioning can kill you or that fresh air on the neck causes: a. a debilitating pain in the back’s traps and erectors or, b. a sore throat. But the longer I live in Italy, the more these temperature-sensitive old wives’ tales make me start questioning myself. Am I losing it?

Was it the iodine? Or were my kids just acting out? Did they dislike the location? Would they have preferred the Amalfi Coast or Euro Disney? Or were they upset because they were the only children on the beach with a haggard mother instead of a freshly face-lifted grandma who screamed incessantly at her lady servant from Sri Lanka? Or maybe it was the old people.

Here’s the thing about kids and old people. Both sides are high maintenance and adverse to change. Trying to keep the under-four crowd safe while making the 85-and-over group happy was a challenge.

The elders (God love ’em) were constantly anxious while watching our children’s antics. They constantly cried out, “Signora, your little girl is going to get hurt climbing!” — the younger of my two boys is pretty — or “Signora the baby boy is eating a cookie off the floor!” My friend’s daughter was well-trained in the five-second rule. “Signora, the children have learned how to open the gate and they have escaped…”

No one young or old could leave my friend and me in peace to cry softly while rocking back and forth slowly. Throughout week one our only solace was the bottle (for me) and cigarettes (for her). Week two was easier. Without sleep for almost 10 days, hallucinating gave us brief respite from our dismal but sunny existence. Week three we really hit our stride. The kids were happy, sun-kissed and rested.

By then, even the mothers were doing better. The octogenarian and her spouse were beginning to get used to going in and out of cardiac arrest at the mere site of half-American preschoolers.

Now that our summer stretch has ended and we’re reaping the benefits of iodine, I can confess to planning for the future. Next year I’m getting a lady servant from Sri Lanka. And maybe a facelift.