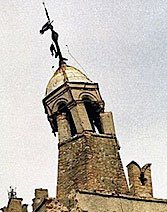 Umbria was devastated in 1997, with Foligno hit hard.
M

y children came home clutching a note the other day and thrust it into my hand. Another parents’ meeting, I thought, scanning it absent-mindedly, until my eyes homed in on the word “earthquake.” The letter informed parents that in the “unfortunate” event of an earthquake, children would be evacuated from the school and taken to a nearby piazza. It is of course commendable that children here in Spoleto are drilled about what to do if an earthquake hits. But it is rather a chilling thought — foolish me for moving our family out to the supposedly safer and quieter climes of Umbria into what is, after all, one of Italy’s most seismic zones and just a hop and a skip from the epicenter of the last big quake in 1997.

I was still living in Rome when that one struck, but I remember feeling our fourth floor apartment sway drunkenly as I instinctively rushed to push my two small children under the lintel — a hopeless gesture no doubt, but the only one that came to mind at the time.

I hate to think what it must have been like up here in the Umbrian hills where buildings cracked and toppled and people — though thankfully few — were killed. So it seems churlish to complain about all the chaos as Spoleto undergoes a massive renovation job to make good the damage done on that September day. For like many towns and villages in this part of Umbria, the skyline is dominated by cranes and almost every building is shrouded in scaffolding. Spoleto is, to all effects, one giant building site, and I can’t say it is much fun living in the thick of it.

Here the problem is compounded by the fact that the city fathers (for there are few mothers) have decided, in their wisdom, to install an elaborate escalator system and banish all traffic from the centre. A noble plan, no doubt, if it weren’t for the fact that it has entailed digging up Spoleto’s loveliest parks and streets and building what I suspect will be ugly great car parks on the approaches to the city.

A friend of mine has had all her shutters closed for almost two years as her building gets a facelift. She and her family say goodbye to the sunlight, the way that Norwegian village does at the start of each winter, as the sun disappears behind the mountains until spring. Until the other day, I thought we were going to get away relatively unscathed. It’s true, I’ve had the rear windscreen of my car smashed in by a passing builders’ truck —whose driver zoomed off without offering to pay the €300 repair bill. And another builders’ truck scraped most of the paintwork off one side of my car as it tried to pass in a narrow street (but this driver was honest enough o leave his name and telephone number). Then, one day last week, I came home to see the ominous signs of feverish activity near our apartment building. As the day wore on, scaffolding was mounted on the two buildings closest to us. When I stepped out onto the terrace the next day, I saw it was overshadowed by a giant crane. And worst of all, when I awoke the following morning and opened the shutters, I was greeted by the sight of three builders grinning at me as they peered in from the apartment across the alleyway. So much for the peace of provincial life. With all the hammering and drilling, it’s hard to hear yourself think, let alone enjoy the birdsong or the country church bells in the distance. And as for safety, I’m thinking of investing in a hard hat for all the family as we dodge showers of rubble on the way to school. Trying desperately to look on the bright side, the renovation work is good for local businesses, as the workmen crowd into the alimentari to buy sandwiches at lunchtime, and to the restaurants in the evening.

Most of the builders seem to be from Naples, and their good-natured banter serves as a welcome foil to the restrained tones of the Spoletini. But do they have to start work — and the yelling, crashing and banging — quite so early in the morning? And do they have to park right across my front entrance, so that I can’t get out of my apartment? As the sensation of being under siege takes hold, I am resorting to petty forms of revenge. The next time the surveyor with the trendy green Chrysler parks in front of my door, he’s going to get a very rude message scrawled in lipstick across his windscreen.