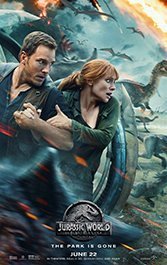 When ‘Jurassic World’ hit theaters three summers ago, the general response could be described as a spirited “good enough.” It had an all-new cast led by Hollywood’s newly crowned It-man Chris Pratt and offered two fresh narrative threads: a dino-park managing to actually open and run as a functioning theme park, plus a deeper dive into the possibilities of genetic modification through the creation of fictional super-dino Indominus Rex (an idea replicated to lesser effect this time). Steven Spielberg, as executive producer, remained very much in the picture. Since 2015, it has grossed $1.67 billion.

“Jurassic World: Fallen Kingdom” set is set a few years o.n Directed by Spaniard J.A. Bayona (“A Monster Calls”), “Fallen Kingdom” arrives with it none of the Spielberg-ian whim and wonder of its predecessor.

Years after Jurassic World’s closure, former operations manager Claire Dearing (Bryce Dallas Howard) is drawn back to the abandoned park following news of an impending volcanic eruption that would likely destroy the now free-roaming attractions. She brings along expert dino-trainer (and on-off lover) Owen (Pratt) and two teenagers, because you can’t make a “Jurassic” movie without some frightened teens. Together, they attempt to save dino-kind from both the volcano’s wrath and the even deadlier threat of capitalism (Rafe Spall plays a villain planning to sell the creatures off to duplicitous millionaires).

Bayona and Trevorrow (returning as screenwriter after directing the previous installment) come close to posing an interesting question right out of the gate; is it better to save these GM lizards in the name of activism and science, or to take nature’s side, allowing them to die out naturally. Unfortunately, and without discussion, they immediately side with the former.

The one truly affecting moment is also the most emotionally manipulative one: Howard, Pratt & Co have a narrow escape from at the island’s shore and witness a wailing Brachiosaurus engulfed in smoke. It’s weepy, but I wish the rest of the film had a touch more of such sentimentality.

Instead, we’re left with a largely by-the-numbers blockbuster with no heart, no character development and for the first time, an overwhelming sense of “who even cares…?” All hope is not lost; however: the film ends in an interesting place and I’ll still be there on opening day to see what the next installment has in store.