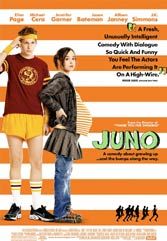 When 16-year-old Juno MacGuff (Ellen Page) learns she’s pregnant by high school chum Paulie (Michael Cera) she turns to an abortion clinic called “Women Now” because “they help women now.” The barbed literalism is typical. In Juno, director Jason Reitman (son of “Ghost Busters” Ivan) creates a quirky contrarian more suited to the 1960s than the 00s. “I really don’t know what kind of a girl I am,” she says.

“Juno” is an imperfect if charming fairy tale about a real girl who, to use her phrase, “is out dealing with things way beyond my maturity level.” Those things include life, love, sex, music, mating, marriage, and babies. The movie’s magnet is Page’s Juno, who energizes Diablo Cody’s smart-ass script (Juno’s high school classmates call her “the cautionary whale,” she says).

Canadians Page and Cera (a gentle delight) mostly keep a slender story from turning hackneyed and Garner sidesteps cliché as a woman desperately seeking motherhood. But “dude”-talking Page, a Halifax native, steals the show, occasionally to its detriment.