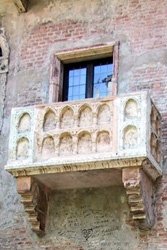 hen Fabio proposed a long weekend getaway to Verona and Venice, I jumped at the chance. Fabio was attending a seminar in a small spa town near Padova, so I imagined days filled with gondolas and romantic gardens. I could see it all it all. While Fabio worked on perfecting his dental implants, I’d focus my do-nothing skills by spending much-needed downtime at the spa. Why not?

I’m not exactly sure what I had in mind when he told me we were staying in Montegrotto Terme. I vaguely remember doing a Google search and pulling up an endless list of hotels and spas. I didn’t bother doing much more investigating, convinced we were headed to some posh resort town (which by the way no one I knew had ever heard of). But hey, I was on the verge of discovering the new “it” place.

When I when I got bored with pampering myself, I figured I’d hope on the next train to Padova for a little Veneto sightseeing. Yup. I had it all planned out. Or so I thought.

As we neared Montegrotto Terme, I got goose-bumps. Pulling into town, you could sense that Montegrotto was probably big in its heyday. Though a small city with a population of slightly more than 10,000, it was an attractive place for those seeking a little bit of relaxation and a bit of peace and quiet.

Please note the emphasis on quiet.

Though it boasted some big four-star hotels with pools and day spas, it seemed that Montegrotto was now distinctly low on pizzazz. But that didn’t seem to bother the Montegrottonesi. Nearing our hotel we saw what looked like a vigile and stopped. We didn’t need fines. But it wasn’t a traffic cop. It was a mannequin dressed as a police officer to keep people out of the fast lane. A few blocks later came a plastic vigilessa. I wondered how long these poor mannequins would last on Rome’s Via Tiburtina. An hour tops.

After checking in, the pleasant concierge ran down the list of “important” things: where the day spa was, what time we could use the pool and where breakfast was served. The next morning, as we stepped into the breakfast room, Fabio and I couldn’t help but notice that we were the only ones not in our bathrobes! And we were also the only ones under 70.

Apparently, Montegrotto was now posh-central for pensionati. Needless to say, Fabio and I were a little out of our element. But we decided we’d make the best of it and headed for the pool. Having forgotten my suit at home, I headed out in search for an appropriate suit and bathing cap (most Italian pools require that you wear one). This means no one looks attractive in pools — unless you dig cone-heads.

Since Montegrotto didn’t exactly have a wide array of shops my choices were limited — specifically to a one-piece bathing suit with ruffles and a flowered bathing cap. I’m sure Fabio would have devoured me after seeing me in that. Grrroowwwl.

Frustrated, we headed for nearby Verona, Romeo-and-Juliet land. As we got close, I was already soaking in Verona’s beauty and romance. We parked and made a beeline towards Juliet’s house, where Romeo professed eternal love. I couldn’t help smiling at Fabio’s eagerness to get there. It was cute.

We took pictures and I suggested we grab an aperitivo in Piazza Erbe, one of Verona’s most beautiful squares. I noticed Fabio start to shift uncomfortably in his chair. At first I shrugged it off to hunger. You know men. Hungry means feisty.

As I pulled out my guidebook and recommend that we check out a nice trattoria praised in Lonely Planet, Fabio sped off in front of me saying he knew of someplace better. The better place a was a bar with a TV, a bar that just so happened to be playing the A.C. Milan vs. Chievo soccer game that afternoon.

But… but… but… what about? Romance? Holiday?

“Milan plays at 3 p.m.,” replied Fabio. “When the game is over we can do all the sightseeing you want. First things first.”

How could I have (again) forgotten the third Italian G: Gondolas, gardens, grandmas… and goals!