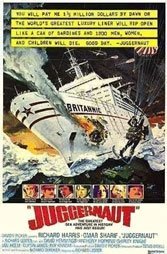 Name a blockbuster that manages to put Omar Sharif, Anthony Hopkins, Ian Holm and David Hemmings (of “Blowup” fame) on the same boat — literally. Interestingly, though, the show-stealer isn’t among the luminaries. He’s the much-underrated Richard Harris. Made at the height of IRA paranoia, “Juggernaut” is an eleventh-hour old-school thriller, one in which creating a credible location — in this case a luxury liner — meant renting real one.

The SS Brittanic (“played” by the former German liner “Hamburg,” on paid loan to the film studio) is on a transatlantic run when shipping company owner (Holm) gets an Irish-lilted call from a man who identifies himself only as Juggernaut. He says there are seven bombs on the vessel, which he’ll help disarm for a price. In comes a team led by military bomb squad expert Anthony Fallon (Harris), who tangles with the captain (Sharif) before trying to find and disarm the bombs.

As hackneyed as it comes, right? Wrong. The savagely-wired Harris, his own time bomb, permeates the film with single-minded fierceness and witty black humor. He plays a superb cat-and-mouse game with Juggernaut. On land, a police superintendent (Hopkins) whose family is on the vessel, pursues separate leads.

Richard Lester, who directed The Beatles in “A Hard Day’s Night” and “Help,” knows that passenger melodrama is a maudlin recipe. Instead, he tries zeroing in on Fallon, whose intense and ironic performance opened the door to later action heroes, in particular Bruce Willis’ John McClane in “Die Hard.” The film came two years after the Cunard Line’s QE2 was hit with a bomb scare and British paratroopers dispatched to hunt down the bomb. It was a hoax.