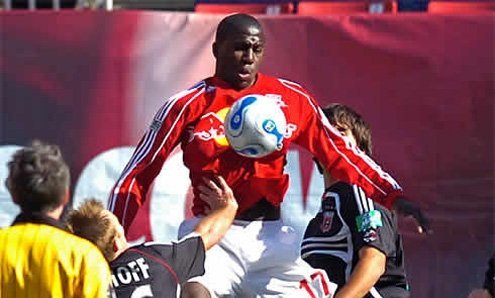 lympic soccer isn’t exactly fraught with fascino, so journalists can be forgiven for focusing their Beijing previews on the few bona-fide international stars at the Chinese games, such as Brazil’s Ronaldinho and Argentina’s Lionel Messi. But Olympic football is basically a youth event, full of unpredictable talent. So surprise is usually the rule, not the exception.

Who will shock and awe in Beijing?

While Brazil and Argentina are indeed the favorites to mine gold, both brimming with stars, two of the most promising kids in Beijing — Jozy Altidore and Giuseppe “Gio” Rossi, both of Spain’s Villarreal — hail from the same, little-known hotbed of footballing talent: New Jersey.

Once upon a time, American soccer players were the butt of the sport’s worst jokes, the stone-footed example of everything that has gone wrong with Pele’s beautiful game.

In recent years, as U.S. soccer has improved, the stereotype of the awkward and clueless American player (think Alexi Lalas) has gradually given way to an improved image, embodied by middling talents such as Landon Donovan, Claudio Reyna and Brian McBride and their achievements, such as leading the United States to the quarter-finals of the 2002 World Cup.

But in Beijing, a new generation of American players is set to star. One plays for the United States, the other for Italy. When their Olympic adventure ends, however, they will both return to Villarreal, where fans of the team that finished second in La Liga last season hope the two will gel into an all-American strike-force able to slay the likes of Real Madrid and Barcelona.

Whooda ever thunk it? Jersey Jozy and Jersey Joe may be set to steal the show at the Beijing Olympics!

Ronaldinho and Messi, eat your hearts out.

To be sure, American soccer fans (this writer included), long a desperate lot in a country indifferent if not actually hostile to their sport, are still bitter and angry over the defection of Jersey Joe to the bel paese. Rossi — born in Teaneck, New Jersey and raised in nearby Clifton, where he played with Danny Szetela, a member of the U.S. team now with Brescia — joined Parma at 14 before being snapped up by Manchester United’s Sir Alex Ferguson.

After the shrewd Scot hailed him as one of the most natural goal scorers he’d ever seen, Rossi famously snubbed then-U.S. Coach Bruce Arena just before the 2006 World Cup. Although just 19 and with only limited cameo appearances for United, Rossi would easily have slotted into the U.S. team in Germany but made it clear his dream was to wait for a call-up to play for the Azzurri.

That decision cost him short-term gain in the form of taking part in a World Cup for the United States. But Rossi appears set for long-term profit.

Clearly one of the most gifted Italian talents of his generation, Jersey Joe virtually single-handedly kept Parma in Serie A while on loan two seasons ago, then scored 11 goals last year to lead tiny Villarreal to second place in Spain.

Now, as the go-to-man in the attack for Pierluigi Casiraghi’s Olympic team, the lightening-quick left-footer, who stands a mere 5-foot-8, has a great chance to lead Italy to its first football gold medal since 1936.

American fans, of course, still rue his decision. And were he part of the U.S. team in Beijing, paired up front with Altidore and the genial Freddy Adu, the Americans could be dreaming of gold, too. After all, the Olympic team includes the same players who beat Pato’s Brazil 2-1 at the Under-20 World Cup last year, with an inspired Adu feeding Altidore for both goals. But realistically, in a “group of death” with the Netherlands and former Olympic champions Nigeria, the Americans will be happy to advance to the knockout stage in Beijing. Thoughts of Jozy, Joe and Freddy all playing for the Stars and Stripes are strictly prohibited.

Alitdore, being American and nearly three years younger than Rossi, has a lot more to prove than the Italian turncoat nicknamed by his Azzurri teammates “America.”

But anyone can see he has it all to succeed. At 6-foot-1 and with strength and pace to burn, Jersey Jozy was dubbed “the prototype of the modern centravanti” by La Gazzetta dello Sport after his display against Brazil last year. Born in little Livingston, he bagged 15 goals in 35 games for local club New York Red Bull before Villarreal laid out $10 million for him this summer — a record price for a U.S. player. Altidore, just 18, scored in his first game for the full U.S. side, in a friendly against rival Mexico. He’s now set to become the first American ever to play in La Liga — excluding Rossi, of course.

But as Americans and Italians tune in to root for their respective teams in Beijing, they should remember that the brightest stars on both sides are simple boys born 28 miles apart in small-town New Jersey. If successful, their teams could meet in the semi-finals or final in the Chinese capital.

That’s highly unlikely. And perhaps fans of both teams should be content with flashes of brilliance from both youngsters. But if they do meet, long-suffering U.S. fans can take heart in an all-American battle for Olympic gold — a clash of titans from Jersey called Jozy and Joe.

— Argentina defended its gold medal in Beijing, defeating Nigeria. Italy was eliminated by Belgium in the quarterfinals while the United States failed to make it out of group play. Rossi was among Italy’s stars.