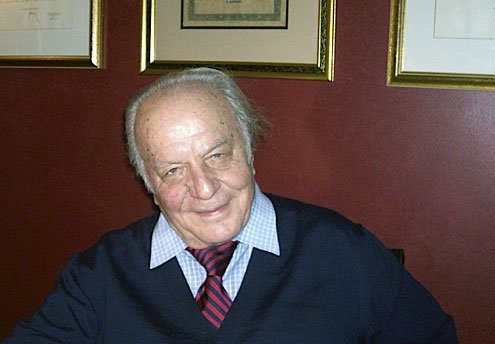 A member of a select group of contemporary poets still writing in Latin, Joseph Tusiani emigrated to the United States in 1947 from San Marco in Lamis, a small town in Puglia. Tusiani, then 23, was already an Italian high school teacher with a doctorate in literature — his father had left for New York City two decades before. He began teaching Italian at local colleges in New York. His first poems were published in The New York Times and later in the New Yorker magazine. But it was his translations of Michelangelo’s poetry into English that gained him notoriety. He recalls a brief encounter with then-presidential candidate John F. Kennedy, who called him the “Michelangelo Man” while on a campaign stop. He has translated Tasso’s “Jerusalem Liberated” and Dante’s “Divine Comedy.” His three-part autobiography — “La Parola Difficile” — is regarded as a seminal work in recounting the Italian immigrant experience. Kristine Crane spoke to him at his Manhattan apartment.

What was your first reaction to New York City?

The skyscrapers. This huge, immense vertical landscape; you wanted to challenge it. You have to have some height in you if you want to stand up to it.

Your Latin professor in Italy said, “If you have one person in life who believes in you, you are lucky.” You met that person in Frances Vinciguerra.

Frances Winwar [Vinciguerra] was a famous biographer. I wanted to write a bit like her. She introduced me to Italians here, and I would read my poems, and they would clap. She would say, “Joseph, I have to rescue you from these people. They will ruin you. You will be a slave of self-adoration.” She introduced me to literary men, the Chicago poets, the New York poets. One night, she burned e verything in front of me, and said, “After having read your poetry, I cannot call myself a poet.” If those words had come from a housewife, it would not have been the same thing.

Your grandmother was the first poet in your life?

My grandmother was illiterate. She possessed true values in life: prayer, generosity. For me she was a poet.”

In “Ode to an Illiterate Poet,” the poem you wrote about her, she spoke in metaphors, parables. Does that Italy still exist?

No, television has killed everything. Everyone is gathered around the television. The grandmother used to be venerated. Mine would tell stories and we would be enraptured, wanting to know how they finished. There is no longer any place for the elderly today. An elderly person is only bothersome, a weight. People have different values today.

Did you identify with the struggles of Italian-American immigrants?

No, not actively. When the rebirth of ethnic identities began [in the early 1970s], I taught a course on Italian-American civilization and had a television program in which I featured great Italian-Americans. We [Italians] copied the African-Americans. I would say that Italians established themselves as individuals, not as a people. As a people, we are disunited. That’s the Italian character: Everyone wants to have his own party. I would say that we are ungovernable. This has always been true. Even Dante says that in the Purgatory. We are a joke as a national entity, but as individuals we are established. We have made Italian civilization, made of Michelangelo, Leonardo, but not the people. The French are a people. The British are a people. We are individuals. It’s the same thing in America. We are Calabrian or Sicilian.

What do you remember about your first trip back to Italy?

It was seven years after I emigrated. I went to visit an old professor of mathematics. When I left her house, my friends asked me, “Did you do anything? You were alone with her for two hours.” I thought, “But you have no concept of friendship.” I had emancipated myself from all that. That mentality still exists. More than I’ve recognized, New York has affected me. I could never be happy there [in Italy.] When I go back, I don’t belong. I exchange greetings with people; they know me because of my reputation. But if I was a laborer, they would ignore me altogether. That’s human nature. I come from a small town where everybody knows everybody. When we are happy, people don’t like it. If we are unhappy, they don’t care. We are fundamentally alone. That is why we should not care what people say. Many times we ruin our lives because we care what other people say.

You have said that when you left Italy, and “lost” the Italian language, you betrayed your soul.

“Perhaps we are two souls: Am I a man, or two strange halves in one?” are the most well-known lines of my verse… Maybe there is no response. There is also the problem of bilingualism. The day in which I stopped saying, mamma and said “mother”…in a way I lost my mother. There was a structure superimposed over me, a structure that was not there originally. We translate even ourselves from one civilization to another.

Can you give me an example?

When I was a child, coffee was a luxury in Italy. Only a few people bought it, and for special occasions, a wake. If a beggar would have stopped me asking for a coffee, I would have said, “Coffee!” In America, not to be able to buy coffee, that was really poverty. Nostalgia, attachment to land is not universal. I know people who never go back, and they suffer for it. Everyone reacts differently, but being uprooted is a violent experience. This doesn’t mean that you must perish where you start, but it [emigrating] is messing with the order of the cosmos. Only those who do not feel do not suffer.

Do you feel American today?

No, after 60 years I still don’t. If you come here past age 13, you will never get rid of your accent. If you are not a child, you are doomed. As soon as I open my mouth, they know somehow that I was not born here. Sometimes I pass for a British citizen.

How did America change you?

I realize that here you have to fill in the gaps of your own education. In Italy at universities, even now, music is not studied, which is a national disgrace. This means you may go through life without the basic rudiments of music. Being Italian, you may say, “We have Verdi.” When you are here [the United States], you realize that Verdi is one person. We have Dante, they have Shakespeare; we have Boccaccio, they have Chaucer. So everything is a re-education. You have to re-educate yourself on a comparative basis.

Some people say poetry can save us from ourselves.

It may make our souls less beastly, make us more gentle.