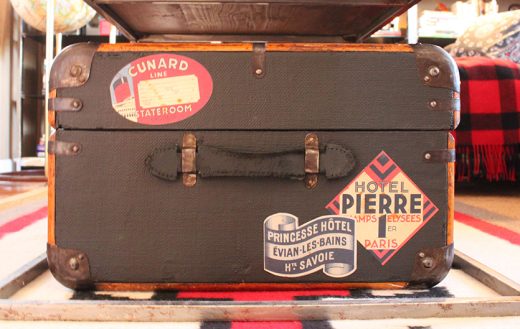 When a veteran talks, be sure to listen.
S

Fred was — as always — in the middle of a story: “…Anyway, so they finally put me on a plane to Naples—”

But Jorge interrupted: “A plane? A plane? Why did you say a plane?”

The suitcase old-timers, including Hank the wheel-less (single-handle, canvas and leather), and Buddy the teal-and-fuchsia hard shell (from East Berlin, circa 1987), looked at each other, amused. This wasn’t the first time they’d heard Fred tell his story.

But Jorge, an ultra-light, four-wheel spinner with a built-in phone charger, was rapt.

“Every kind of shampoo since 1893 has spilled in me, and I’m still in service,” said Ernest. “Usually the humans get mad at themselves for packing it.”

Fred picked up again: “Well, cause wouldn’t ya know it, I was finally going to Naples, just the wrong one! I ended up in Naples, Florida and not Naples, Italy!”

Jorge considered this for a second before exploding into a fit of giggles. Hank and Buddy just sighed.

Fred loved being on the welcoming committee for fresh case faces. He looked at Jorge, no stickers on his shell yet, no luggage tag marking the moves of his owners, his corners still perfectly buff. Little did Jorge know the joys that would attend him in years of travel to come.

“So, Jorge,” said Fred, “are you excited for your first trip?”

“It’s not exactly my first, first. I was shipped to the store in White Plains. So, I mean, I’m not a total newbie.”

Some snickers filled the room. Hank and Buddy tossed around angry glares.

Hank had seen off innumerable new guys: “You’re a little nervous, aren’t ya?”

Jorge’s shiny silver shell flushed to a tungsten grey. He looked away.

Buddy didn’t get his name for nothing: “Kid, you got nothing to worry about. The fellas at the airport will direct you to the right place, so as long as you pay attention and aren’t rude, you’ve got the trick down.”

Jorge nodded, relieved. But with his biggest worry assuaged, new ones sprung up, as in what happens when you open a suitcase to reveal many smaller pouches inside it?

Fred felt the spotlight had been off him long enough. “Just remember, try not to become overweight luggage!”

A few seconds of awkward silence ensued. Jorge, stricken with panic, looked to Hank and Buddy for help. Hank muttered “Fred…” under his breath. Buddy glanced to the right and Jorge, following his gaze, spotted a lumpy two-wheeler, all the extra-space zippers opened, and a large orange tag marking the fellow suitcase as “OVERWEIGHT.”

But Louie cut him short. “No, you kind of did mean that… but it’s okay. It’s actually a good way to talk to the new kid about the pervasive overweight-ism in this profession.”

Whatever happens, never let yourself be seduced and abandoned…

Louie then turned to the newbie. “Jorge, was it? Right. Listen, if you do become overweight, you need to understand it’s not your fault. The fault is of the humans, that pack those tight jeans they’ve never worn because they finally might. Or that extra suit. Or the dummies that bring their own conditioner on an international trip. But it’s never your fault. Understand?” Jorge nodded vigorously.

“And if you ever do become overweight luggage,” Louie continued, “it’s not that bad. I could do without the dramatic huffing and puffing when they lift me, or the derisive drawing of a man breaking his back as he lifts me as seen on this hideous orange label, but besides that, you get extra attention. So, chin up, bud.”

Now, Jorge really did feel better. Hank, however, could tell that Jorge still had more questions. “Go on, ask away.”

“Do I need to do anything special if I’m first class luggage?”

Fred couldn’t help himself: “Just don’t get all snooty like Jean-Paul over there,” pointing to a supple leather duffle with monogrammed initials. “He used to go by Johnny.”

The door to the tarmac opened and some airport crew members filed in, starting to gather the luggage. Hank looked over at Jorge.

Jorge: “What if something spills inside me?”

The answer, this time, came from a large trunk with destination stickers all over him and dark patches of leather that looked like stains. A noble-looking trunk by the name of Ernest. “Every kind of shampoo since 1893 has spilled in me, and I’m still in service,” said Ernest. “Usually the humans get mad at themselves for packing it and, as we all say”— everyone joined in — “You can always blame it on the airport!”