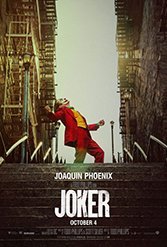 In an era swamped with comic book-driven extravaganzas, it would stand to reason if “Joker” was just another brick in that wall. The Joker was Batman’s yowling nemesis and he’s been covered in a plethora of films that harped on him in outrageous terms only (Jack Nicholson had lurid fun with him in Tim Burton’s 1989 “Batman.”)

But now cometh Todd Phillips’s “Joker,” which shatters assembly line paradigms by zeroing in on the genesis of a villain, determined to give this bad-guy-in-waiting an identity separate from that of his nemesis. The result is a nuanced character study brought to sinister life by an actor who revels in making himself at home in the weirdest of roles. That would be Joaquin Phoenix, who yet again shows that at his moody and chameleonic best he is perhaps the joker of jokers of his acting generation.

Co-writer and director Phillips (who helped write Sacha Baron Cohen’s 2006 “Borat”) is less interested in pandering to the DC Comic-driven Batman franchise than he is in tracking the demented growth of a man who will develop into the principle thorn in a superhero’s side. He dispenses with the razzmatazz of special effects to give Phoenix’s Joker all the space he needs to grab stage center and molt into a monster.

In a welcome anomaly, “Joker” is a dimly lit subversion of Nicholson’s madcap portrayal. Phillips’s Joker is born of the bizarre, schooled in it, and unable to step outside its ugly, if self-absorbed, limelight. But he doesn’t get to villainy by chance.

Phoenix plays Arthur Fleck, an underclass loser with a neurological disorder that causes him to burst out in howling laughter at the most inappropriate times. He’s sickened by himself, and others try to steer clear. His mother (Frances Conroy) loves her boy, and he loves her back, but there’s not much else in the affection department. The premise is obvious: Fleck doesn’t mean to be funny, he’s a social misfit.

Poor man Fleck lives in a Gotham City so scuzzy it’s citizens can’t bear it anymore and revolt — “Is it just me, or are things getting crazier out there?” he asks. The answer is both.

Fleck’s conditions and the stirring of dissent around him will eventual fuel his delusions. For now, he’s has a day job as a paid clown with night gigs as a standup comedian. As Gotham frays, so does Arthur Fleck, and the descent begins.

Phoenix has always had the uncanny ability to make the naive and the ominous at home with each other, and here he does it in such a way that there’s no doubt that outright madness is just waiting to hitch a ride. Phillips has done something few have done in the superhero era, delve into how a fictional citizen of a decaying metropolis grows into his idiosyncratic villainy. It’s a masterstroke for both the writer and the lead, and an unsettling piece of cinema that turns all the known superhero tropes into hash.