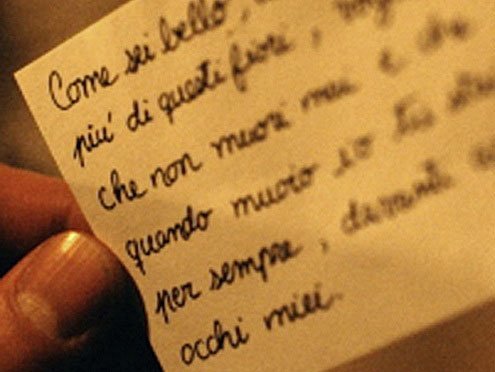 ere’s something I learned quickly: Italian men don’t really do subtle. You may or may not already know this, but hear me out. When I arrived in Italy for my first extended stay a few years ago, I had no idea what was about to hit me. Twenty years old, I was on a compulsory “year abroad” which was part of my degree, and Genoa was the destination.

I don’t think that a comprehensive study of the local uomini was quite what my tutors had in mind, but no matter; I’m still convinced that it was more enriching, enlightening and exciting than any textbook would ever be.

After just a few days of walking around the city and hearing “bella,” “bellissima,” whispered by men of all ages on every street corner, I knew I was somewhere a little different.

In a good way.

There was a boy in my storia del cinema class. My friend and I named him “Johnny Depp” because he was so beautiful. I spent many hours staring happily at the back of his head while periodically writing down the odd word like “Fellini” or “Luce.” Suffice it to say that there’s not a lot I could tell you today about the history of Italian cinema. There is a lot I could say about Johnny Depp’s neck and the way his hair curled at the nape. A few weeks into the course, my friend raised the stakes. She said that if I could get a date with him, she would buy me one hundred baci, the chocolate kisses. As any self-respecting chocolate lover knows, I had no choice.

The following week, my friend was struck down with a serious case of heartbreak and decided to skip a class. As a woman with a mission, I could not do the same. And as chance would have it, I walked into the room to find Johnny Depp — sitting alone.

I found a seat at a respectable distance from his (it’s important to be aware of stalkerish tendencies at all times), and tried frantically to come up with something sophisticated and intelligent to say.

Ah yes, that was it.

It had to be sophisticated and intelligent.

In the next few minutes I found out that his name was Carlo, he was 22, and he came from Vengtimiglia. He was so Italian. The class filled up and the conversation ended, but the foundations were laid. It turned out that I didn’t really need to do anything else, Johnny himself took it from there and began to woo me.

In the months and years that have followed, many other Italian Lotharios have crossed my path. I’ve had poetry written about me and been told that I am a beautiful muse (the guy who worked at the local tabbacchaio). I’ve been presented with an old copy of the “Divine Comedy,” because apparently Dante would have found me inspiring (the guy from the local pasticceria.)

I’ve realized that when a man hisses at you in the street, you don’t need to be scared; he’s actually paying you a compliment. Female friends recite similar experiences. This is a country that celebrates women.

A few weeks ago I was returning to Rome from a few days break at home. On leaving the taxi I took from the train station, the driver turned to me and said: “Complimenti, sei bellissima.”

— The author, who holds British and Israeli citizenship, is an editorial intern at WHERE Rome magazine.

About the Author: Tal Gottesman

Tal Gottesman studied English and Italian literature at university in Britian and worked in publishing for a over a year after graduating. She did internship at WHERE Rome magazine. She works at the Daily Mail in London.