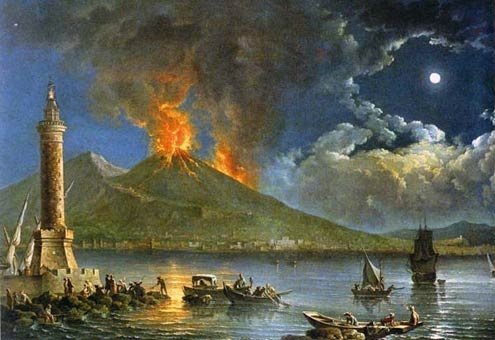 American novelist John Domini was in his early twenties when he first read Dante. The experience changed his life. “A dip into the Inferno at age 23 or 24 spat me out, smoking, into my first fully realized fiction,” he says.

Since then, the 62-year-old author has produced a body of acclaimed, Italy-focused fiction, including the first two novels in the so-called “Earthquake trilogy,” whose thriller-like storylines hinge on the city of Naples, its teeming underworld, and Americans forced to reckon with the city’s complex cultural collisions. “Earthquake I.D.,” the first book in the trilogy was published in 2007 and nominated for a Pulitzer Prize. Fellow novelist and Pulitzer-winner Richard Ford called it “a novel worth savoring.”

Domini followed that up with 2009’s “A Tomb on the Periphery,” which was nominated for a National Book Critics Circle Award. The novel, praised by Chicago critic Jason Pettus as a “smart and fast-paced crime noir,” again put Naples at the center of the action and included the theme of illegal immigration as seen from the Italian vantage point.

Domini has said the third trilogy novel will dig deeper into that theme. “Earthquake I.D.” has been translated into Italian (“Terremoto Napoletano,” Pironti Editore) with “Tomb” also in the translation works.

Domini, the son of a Neapolitan immigrant father and an American mother, was born in Manhattan. His mother taught public school while his father, traumatized by World War II, eventually became a successful producer and distributor of Italian food products.

Domini began writing as a youth, winning awards in high school and college. He earned degrees from Boston University and Johns Hopkins. In Boston, he taught writing at all levels, including community colleges and Harvard, while also contributing reviews to The New York Time and the Boston Phoenix.

He then turned to fiction, publishing in the Paris Review and Ploughshares and writing two short story collections, one set primarily in Boston and the other in Naples.

Domini now lives in Des Moines, Iowa with his wife Lettie, where he teaches at Iowa State University. But he’s a frequent visitor to Naples, a city that haunts his fiction and his dreamscapes.

David Winner discussed his work with him via email. These are excerpts from their exchange.

How did your familial connections fit into your themes?

What you call “familial connections,” I call Pop. My father was born in Naples and he didn’t take off for New York till in his early 20s. Pop was badly shaken by his experiences as a teenage guerilla fighter during the war. He was convinced the battered country had no future for him – and he’d fallen in love with a Manhattan woman. For much of the last century, lower Manhattan was Italian-American, and Mom had come over with some ad-hoc add-on of the Marshall Plan. She worked in a camp school, outside Naples, with orphans and poor children, and my father was the Italian liaison. I mean, who could ask for a better connection? War, romance, and the yearning for a better world…

My first visits came in preadolescence, and right away I felt at home with the roiling streets, the busy meals, the many-tentacled family. I particularly enjoyed my nonno, a master of gesture and aphorism. It was in Naples, at age 11, that I began writing. An adventure novel, what else, a boy’s adventure, and ever since the city has been bound up in my sense my calling.

What about as an adult?

I began to return to Naples on my own, divorced and lonesome and no longer young, in the early 1990s. For about a decade there I seemed to need the city just about every year. It’s clear to me now that it all had to do with the collapse of my marriage and the search for what to do with the rest of my life. I expressed my fledgling solo status by throwing myself into Neapolitan life. By the later 1990s, something else had emerged, a loose trilogy of long stories set in Naples.

What struck you during these visits?

Southern Italy is a fascinating setting, a dramatic wellspring, perhaps unmatched around today’s spinning globe. For starters, just to capture the city’s quality – or at least to scrape together a tasty pile of crumbs – the writing needs to be sensually rich. Description, meditation, dialog, all needs that lemony Neapolitan tang. Then you’ve got to get your mind around the shifting cultural tectonics of the place, the traces and tensions within NATO, now under more pressure still from the rising wave of immigrants out of war-torn Africa and the Middle East. The brew could give anyone visions.

The Naples novels hinge on a fictional earthquake. What role does it play?

The earthquake I imagine for Naples is a fact of life there. The city’s so near to Vesuvius that it’s been seismically unstable since its founding. My imagining of a disaster on the order of Hurricane Katrina in New Orleans is a way of expressing the city’s various tensions and pressures.

You’ve spent time in Italy recently. What’s your sense of the country in cultural and political terms?

These days … speaking frankly with Italians is to hear nothing less than the collapse of possibility. Families are drawing in, whole communities in fact, as people struggle to protect what matters most. People are “circling the wagons,” an American might say. I mean, the country wasn’t that well off to begin with, getting and keeping a job was the single greatest challenge of most people’s lives, and even the folks with a job in hand were often faced with the “crisi della quarta settimana,” in which the paycheck wouldn’t stretch into the fourth week of the month. And now these same citizens are being asked to absorb austerity measures? Cuts to pension, health care, education, more?

Okay, granted, a novelist can’t be an economist. Still, it doesn’t take spreadsheets and algorithms to see that the way out of the current euro-hole isn’t to slash spending. What makes more sense by far is the opposite, a solution best expressed by Paul Krugman in the Times: “Jobs now, deficits later.”

[Prime Minister Mario] Monti is right to condemn the country’s pervasive corruption, the Mafia in all its forms. Such bloodsuckers take a vicious toll, no question. One of my family members recently lost a business to Camorra thuggery. But if unemployment continues at 15 percent or worse, and if those on the dole have nothing to carry them through the third week, let alone the fourth, where will they turn if not to the black market? What option do you leave folks — decent folks, the rank and file — if you cut government help to the bone?

It’s time for what Roosevelt … did back in the mid-1930s. Italy needs its own Works Product Administration, its own Civilian Conservation Corps. As for the latter, it would have plenty to do, God knows. The cultural patrimony, dating back to the Greeks, all needs constant shoring up. No country in the West has such a need for better preservation and, at the same time, more streamlined infrastructure.

Silvio Berlusconi, who is plotting another comeback, has been hammered over years by the press. What’s your view of him?

He was a charismatic leader who rose out of the ashes, namely the mess of the bribery scandals known as Tangentopoli, with promises of fundamental change, only to wind up, soon enough, as another gangster when it comes to what’s good for his country and his public. What’s been his legacy except dashed hopes and deeper cynicism?

You’ve mentioned Dante as a primal force, but what other Italian authors come to mind?

Italo Calvino, in all his urbanity and sting. I’ve written about him and taught him. But speaking of urbanity and sting, I’ve got to mention the great Neapolitan Eduardo De Fillipo. A playwright, poet, and songwriter, not to mention an actor and director, he’s distressingly little known in the States. Yet his gimlet eye for human frailty, an odd compassionate cool, especially in “I Voci di Dentro” or “Questi Fantasmi,” strikes me as an essential quality of heart, for a writer.