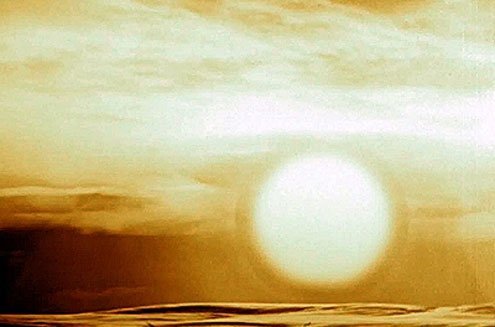 oe 1 looked like a Midwest tornado. Narrow at the base, chuffed and self-important higher up, the surging invention of some sinister Braque. No doubt teenaged Ted Kennedy was impressed — once he found out about it, that is. He and his glee club friends at Milton Academy. Joe 1 was no joke at leader-grooming prep schools.

Nowhere else for that matter.

On Aug. 29, 1949, the Soviet Union detonated its first nuclear weapon. The nickname Joe 1 seemed appropriate to the American military, since busybody Josef Stalin had drummed it up. The Soviets, more poetic, called the Joe 1 test explosion First Lightening.

If imitation is flattery, Soviet atom bomb chief Lavrentiy Beria yielded to it by way of connivance. He told his scientists to build a bomb that looked just like the one dropped on Hiroshima in August 1945. When completed, it did, a Fat Man clone. The American Fat Man bomb killed 40,000.

But Joe 1 wasn’t intended to kill, only to impress and scare. Soviet scientists had carved out their own Nevada in the convincing hinterlands of northeast Kazakhstan, at a place called Semipalatinsk. There, the terrain was lunar. Uninhabited lands, Beria insisted. He was wrong and knew it, but it hardly mattered. Radiation-saturated villages were an irrelevancy at best, not even collateral damage.

“We have evidence that within recent weeks an atomic explosion occurred in the USSR… The eventual development of this new force by other nations was to be expected. This probability has always been taken into account by us.”

Tantamount to saying, “There has been a terrorist attack by a hostile force on our soil. We knew it might happen.”

Though American soil hadn’t been violated, panic came anyway. The Red menace genetics of the fast-expanding Cold War had already settled on survival of the fittest, with nuclear weapons the ironic measure of supreme fitness. After First Lightening the U.S. throttled up; by December it had 200 bombs, warehouses more than the Soviets. But no one knew the true numbers. The Soviets were addicted to such blind man’s bluff.

Within a few years, the United States was seduced by all things nuclear, homeland security of the day. Headlines meted out it as sport. Here’s one from 1953, ahead of the Yucca Flats explosions near Las Vegas: “Vast Atomic Strides Expected in Tests; All Is Ready on Nevada Desert for 35th Nuclear Explosion — Series Starts Tuesday.” Las Vegas, 80 miles away, was called “this frontier town of former days.” Emphasis on “former,” since no one knew if latter would apply. Best to suggest a past-tense rich city in the event it became that in the present.

Rightly so, since by then the explosives being tested were hydrogen bombs, the most lethal weapon ever invented by man. Early H-Bombs were 100, 200 times more powerful than Fat Boy and Joe 1. In October 1961, the Soviets detonated the 50-megaton Tsar Bomb over Novaya Zemlya in the Barents Sea. It weighed 27 tons and yielded blast 10 times more powerful than all the firepower expended in World War II, including the two American atom bombs.

The original Tsar was set for 100-megatons, halved only when scientists feared radioactive fallout blowing back over Soviet territory — never mind that few in Russia knew what fallout was.

Photos of the Tsar Bomb looked less like a Midwest tornado than a pretty apocalypse, an eight-kilometer-wide firebomb that morphed into a low-slung, predatory sun. Windows broke in Sweden and Finland. Soon after, one of its designers, Andrei Sakharov, began his campaign against nuclear proliferation.

A dose of sobriety — coupled with awareness that endless egregiousness meant the end, literally — led to a limited nuclear test ban treaty in 1963. That and the Cuban Missile Crisis. France, new to the game, dissented and used its Pacific private parts to continue the incinerating.

At 60, Joe 1 is now well into middle age. In some respects deceased. Which makes him worth dusting off from time to time.

The world’s two most potent nations suddenly had weapons so powerful that they couldn’t be tested in battle. That was non-frivolously historic. It was also dangerous beyond imagination. Conflict was redesigned to account for self-preservation. Constant snarling finally came ahead of war. And postmodernism was born.