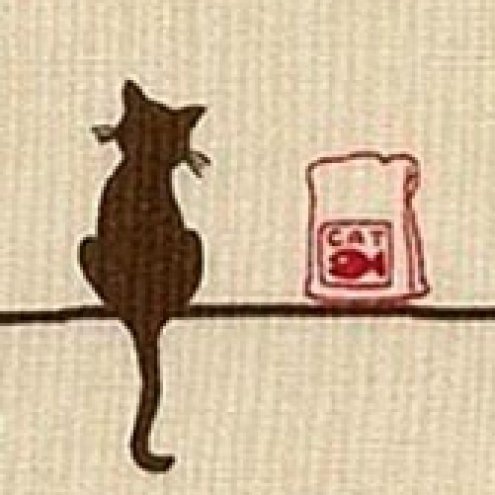 y favorite cat had a stroke over the winter. My doctor friend gave me the news and added the cat was unlikely to survive more than a few days. As he described it, the cat was a sullen and immobile lump existing on a cushion and fed with a syringe.

My friend’s wife, an animal-lover, adamantly resisted taking the cat to the vet. She already knew the verdict. Desperately sick cats are not rushed to intensive care wards or pined over while frozen into wheelchairs.

My response to all this was sad but typically fatalistic: everything not killed by chaos gets sick and dies in the end. I merely awaited the formality of the next message announcing the cat’s exit.

Instead, I began getting short notes announcing first that the cat was “somehow” still alive, while paralyzed, and later, details about moments of alertness, when it was able to eat. But as it ate, its teeth began falling out one at a time.

It was at this juncture that I wanted my favorite cat dead, for its own good. Quality of cat life, such as it is, doesn’t include dentures. But death was nowhere to be found. I pitied my favorite cat and found its owners selfish. They were misusing humanness, or so I believed.

Finally, several months later, I finally saw my favorite cat in the flesh, though there was little of it. It, she, was a narrow click of fluffy bone abjectly situated on that same stale pillow but now at least able to eat food on its own if the food was left nearby.

The cat was not in pain, or so I was told. This made it deserving of a chance. I scoffed quietly.

A few weeks after my arrival, in the night, I heard a repeated thumping sound, like something falling off a table.

This was the new sound of my favorite disabled but no longer paralyzed feline. It was now lifting itself from the cushion and trying, based on muscle memory, to literally push itself to the litter box. Each time it tried standing it flopped over. That was the sound.

But the flopping didn’t end. On the contrary, the cat began to push itself around more regularly, as if spoken to by Job on the advice of Noah. It pushed off walls and furniture to its next station like a forlorn but determined Christian.

Soon after, it began regularly propelling itself toward the dinner table where it was fed bits of this and slices of that. It licked and ate avidly.

Then came the day when my favorite cat, now imitating Lazarus, rose from its cushion before my eyes, sat on its hind legs, and walked several steps as part of its litter box pilgrimage. After the third step came a flop. It rose, walked three more steps, and flopped again.

Now I was amazed. What I was watching struck me as the purest animal form of resilience but stripped of the furry sentimentalism concocted by humans, as in, “Miracle cat.”

My favorite cat had not been reborn, nor had it discovered Jesus. It was merely living out what’s forced upon us all, survival, and trying to make the best of an abject situation. Here, for human purposes at least, was the stuff of an inspirational video, a viral hit. But for my favorite cat, it was just a memo from its brain to its body that eating and defecating in trained ways would now require radical efforts, efforts that involved the feral rehabilitation of atrophied limbs.

After a month, my favorite cat had outlived its obituary by six months. It was now walking and flopping and sometimes sitting for a while and looking at delicious birds outside. Its eyes looked weary but present. Maybe from time to time it even smiled, but don’t tell Hallmark.

My favorite cat may still die on any given night. It may be betrayed by the second coming of a stroke. What doesn’t kill you makes you stronger, goes a useful if often inaccurate human saying. The feline equivalent might be, If it doesn’t kill you, it’s business as usual until you’re dead.

Editor’s note: The cat died in its sleep one week after this column was published.