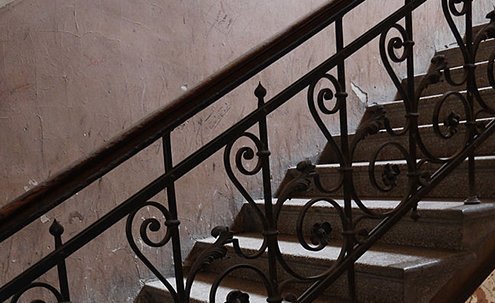 On a summer evening in 1967, Helen walked alone through the Greenwich Village crowd. She passed smartly dressed couples lined up at the Bon Soir, a shirtless boy in a magician’s cape who handed her a flyer; he was barely propped up by the solid heat tainted with airborne lead, garbage. The Mad Lads were playing tonight, and the Hand People. Ozone bloomed, then a spatter of rain marked her light shift and sandals.

She decided to take shelter in the Eighth Street bus crosstown. Rain struck the roof and as suddenly ceased when they entered her own scruffy neighborhood, polished with pink and green neon. The pavement was already drying as she crossed busy St. Marks Place, avoiding a forest of closing umbrellas.

The whole way home she had been thinking about her psychotherapist, silently arguing while keeping her teary face turned to the window glass. “You’re attacking me because I’m not doing things your way. Well, I’ve made some mistakes, but I’ve made even more progress, according to you! Don’t I get credit for that?”

As she opened her building door, she reached for the little money purse to which her keys were attached. She dug into her crocheted shoulder bag again. Gone. There had been at least four dollars folded inside, plus assorted coins. She hurried out to the street, partly retraced her steps to the bus stop, before giving up.

In the vestibule she could hear raucous, wheeling Puerto Rican music like those cartoons in which everyone chased each other before collapsing in a dizzy heap. On the third floor someone’s plunky piano practice competed with a Nancy Wilson single, lately left on to repeat many times in a row. Helen shared her fire escape with an exotic plant storeowner who had lived there for decades. She knocked on his door, hoping he would allow her access through his apartment, though he would scold her for leaving her windows unlocked. Finally, she walked back down to the third floor. The Nancy Wilson-lover’s door opened on what turned out to be a teary-eyed blond sausaged into a bath towel. She claimed to have a gate obstructing her fire escape and when Helen asked if she could possibly unlock it, she said that she couldn’t remember where she’d hidden the key. Outside it was two more steps down to the super’s apartment where he was often dead drunk by this hour. She knocked for a while, then gave up.

Helen would have to ask a passerby for dimes and then start calling friends from a pay phone.

A hippie was approaching down the street. Boy or man? He was narrow-hipped, his cockeyed but appealing face still marred by residual acne, but she saw that his forearms, exposed in a tee shirt, were muscular.

“A dime for a phone call?” He looked her up and down with one appraising eye. “If you’re after my money you have to do better that!”

“Oh, drop it.” She waved him away. “It isn’t your money, it’s only one dime we’re discussing here.”

“What’s the matter? Somebody rob you? You live in this building?”

She said warily, “Why do you ask?”

“‘Cause I live right around the corner, back to back with this one. You just break up with somebody? Face it, Girl. You into Nancy Wilson, by any chance?”

She studied him, trying to size him up. Bell-bottoms, bandana, a Mr. Clean earring, the lank hair eclipsing his sideburns. What was he, a hippie? Some interesting new thing, a psychedelic Puerto Rican?

She said, “You live around the corner?”

“Yeah, in the building right behind this one.”

“Do you want to earn two dollars?” Did that sound too cheap? “I can’t pay you tonight though. You’d have to come back on Monday. Can you help me jimmy the lock to my apartment?”

“Jimmy. Hey, that’s my name. I’m Jimmy. Hi, Helen!” he said when she introduced herself. “You serious? Wait a minute, what kind of lock you got?”

“Nothing fancy. Just what was already on the door when I moved in.”

“I don’t want two dollars, but I’ll tell you, there’s a favor you could do me.”

She followed him upstairs, Jimmy silent in sneakers. He wanted to use her bathroom once they got inside. Why couldn’t he use his own bathroom? Maybe he lived in one of those tenements where four different families shared the same reeking water closet. After she pointed out her door, he continued upstairs to the bulkhead and less than thirty seconds later had entered from the fire escape and was unlocking her apartment from inside.

“Nice place,” he said, inviting her in with a flourish. “Cozy. You could use more furniture, though. Let me know if you need to pick up some lamps or a cheap stereo.”

He was sleazy, but weirdly ingratiating.

“Are you in the hi-fi business?”

“No, but you’re close. I work in a record store. And I have a rock group.”

“Really? Are you famous?”

She was flirting. It was easy with him. He seemed eager for the attention, frisky but sexually neutral. Except for the bristling sideburns and long ropy arms. There was a jittery charge to his body that made her think of some of the big sixth grade boys bouncing heedlessly through the clogged hallways of the building where she taught, both threatening and unthreatening.

“Not yet but we will be. The Love Addicts.”

He had to be putting her on. “Very Jackie Susann.”

“Yeah, Jackie steams me up. I’d love to get inside her caftan.”

Helen smiled. “You are a fan.”

“Well, she shows you where the world is really at. She’s got a heavy theme.”

“Loneliness,” he replied with apparent sincerity. “You can’t hold onto true love. And all the tinsel and everything else is no substitute. That’s what the dolls are for. She’s even got a character named Helen! You read the book yet?”

She nodded at her narrow bathroom door, careful not to show revulsion. She might not kick him out of bed, though he would have to shower first. His vivid tang stayed on the air like a just-nibbled scallion’s.

For several minutes she puttered self-consciously, turning on her radio so she wouldn’t hear him doing anything unpleasant. All summer her favorite DJ had been playing the entire “Sgt. Pepper” album, as if it would be a sacrilege to favor any single song. She peered quietly into a few drawers to make sure that nothing had been stolen in the seconds that Jimmy was inside unsupervised. She still had nineteen dollars in her jewelry box. What was he doing in there? She suddenly pictured him bursting out stark naked, to pounce on her. Instead, he opened the door and sidled out.

“Uh, so I’m coming back tomorrow evening for the money, right?”

“No, I won’t be here then — hey wait a minute,” she corrected herself. “You told me you didn’t want any money.”

“That’s right. My mistake.” His leg was twanging with hyperactivity. “But I could come by anyway, would that be cool with you? Or I’m going to be playing at the bandshell in Tompkins Square. Want to come? Around nine?”

“With your boyfriend? He better looking than me?”

Her eyes lingered on his chest and shoulders before returning to his face.

“So how about you let me take you out? Like, to some movie you like, foreign movies?” His patter was accelerating. Nervousness? He wasn’t a dolt, though he sounded like one. “What kind of movies he takes you to? You think I’m too young for you?”

The predatory charge of this position — his eyes blazing but wary, each one daring the other — overwhelmed the negatives. The plusses were all on display. High cheekbones agleam, the taut tee shirt. When she moved he spread his arms as if to catch her. Then they were all over each other. Tongue sweeping around like a… minesweeper? They descended to her bed, clutching, the scent of him swamping her nostrils, but appealingly now: Mother’s goulash, chopped onion, raw lamb and tomato. She held onto his tensed back and grab-able ass in its cladding of slithery denim.

His tongue, teasing and darting, traced the image of a stylized keyhole in her mind. She was being watched, featureless, outlined in flame, with her fingertips, genitals, ends of her long hair on fire. Then she envisioned an actual peephole from memory. A long-ago date who was dressed for a party in fussy Victorian clothes, top hat, even a stiletto cane, black with a smooth frog’s head knob. When their hostess had come to the peephole, he poked the stiletto in. Ouch! Helen had never learned what his motive had been.

For several minutes they grappled, until they heard male voices, a pounding of feet in the hallway. They parted, as if to avoid getting caught. Helen had already had one orgasm, a promising imbalance. She could just call it quits; tell him that he had to get out. Then would she feel icky and dumped, even though she’d used him, kicked him out? Of course. She didn’t want to be alone.

“Be back in a second,” she promised. His arm shielded his eyes from the overhead light.

“I’m just going to go put in my diaphragm,” she reassured him.

Jimmy sat up, running both hands though his hair, eyes darting around her small bedroom in a way that suggested she better not take too long. Who knew what he’d be up to, like the overgrown boys in her classroom who wreaked havoc the moment her back was turned.

Her cheeks in the mirror were vivid, eyes anxious. She squeezed out a dollop of gel and was inserting the slippery diaphragm with one foot on the toilet seat, always a bit of a pain, when she heard her apartment door slam.

What had just happened? From her small kitchen, she leaned into the hallway in time to hear the street door banging three flights down. Her purse! No, it still hung looped over a chair at the table. Well, why would he have snatched it, since he already knew she’d been robbed? She spent the next few minutes making sure that nothing else was stolen. Was he mentally ill? Was there something repulsive about her?

She went back into her bathroom to look around for clues — what had he been doing in there for a good five or six minutes? No smell, though the window was shut. Nothing out of the ordinary. Except, now she noticed her bath towel: sopping! The walls were damp.

Well, speed freaks were known to be very fastidious, cleaning obsessively. Had he shot himself up in her bathroom? And then tidied up? Or taken a sponge bath? He’d seemed wired coming out.

She felt thrown over, bereft. Of his energy, manic, a flickering warmth, though she’d found him absurd and repellant. He had hurled himself out to the street before she’d had a chance to find out what the slippery layer of panic he barely concealed might reveal underneath.

She could head right back out and pick up someone else. Since she had her damn diaphragm in! She went to look in her dresser mirror. There was nothing visibly wrong with her. There were plenty of men. She’d find somebody normal. She could try considering herself lucky that, after having been pick-pocketed, she hadn’t also been held up at knifepoint in her own apartment. Would anyone answer their phone in this whole city, anyone? Who didn’t work for a religious hotline? The lights went off next door and half the fire escape went black.

— “Jimmy” is an excerpt from “Autonomy,” an unpublished novel about a psychotherapy cult in New York in the 1960s and 1980s. Bonnie Altucher grew up in New York City and has an MFA in fiction from Brooklyn College.

About the Author: Bonnie Altucher