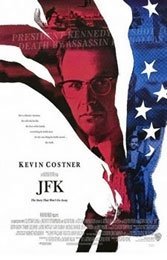 Garrison (Kevin Costner) is Stone’s method and madness in what amounts to a pseudo-biography of an ostentatious prosecutor with intriguing theories no one could prove. While the real-life Garrison had more lows than highs, Stone dodges that bullet. Costner’s Garrison is an earnest man bucking a system he can’t possibly beat. It’s the underdog school of historical movie-making that ignores history in favor of passionately held points.

Credit Stone for the effort. Few mainstream filmmakers were inclined to tackle the JFK assassination head-on, let alone embrace the popular rogue view that a mix of criminals and Castro-haters hatched and carried out the JFK shooting, with Oswald the sacrificial lamb (Gary Oldman is cast as Oswald). Here, Stone mixes fact and fiction, opening with footage of Dwight Eisenhower’s presciently accurate warning about the development of a military-industrial and later zeroing in of Garrison’s obsession with Clay Shaw (Tommy-Lee Jones), a sphinxian CIA middleman who helped develop the murder plot (Shaw was tried and acquitted). Conspiracy in the bank, Stone capably builds characters to suit his thesis — if Costner is earnest, Jones is exceptional.

Exceptionally entertaining as a thriller, JFK is otherwise heavy-handed and self-fulfilling. As if Stone’s intentions weren’t clear enough, Garrison has a bit part as Supreme Court Chief Justice Earl Warren, who oversaw the original one-gunman report. Garrison died a year after the film’s release.